After a week of Motorola leaks, especially related to Moto X and the new lineup of Droids from Moto, we end the spree with a fresh picture of a new Maxx model. The pic comes from the usual leakster @evleaks and you can check out the device below. 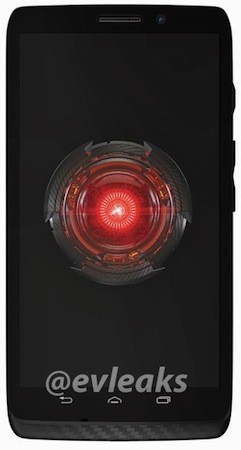 This is supposed to be the Droid MAXX, that will come to Verizon later in the year and sport a Kevlar frame with capacitive buttons. Previous leaks claim that this model codename is XT1080M, an extended battery version of the already leaked Droid Ultra aka XT1080. That one was spotted on Motorola’s website, so it’s pretty much official .

There was also a sighting of the XT1080 at the FCC database, where the Moto X was also seen at some point. It appears that Motorola will roll out an entire new series, that also includes the XT1030 model, as the Droid Mini and the XT1060 Moto X Verizon version. No idea what the specs will be, but I have a feeling we’re close to the big launch.