If you want to purchase the thinnest smartphone in the world, then you’ll have to pay $600 to get it unlocked on AT&T. It’s the Motorola Droid RAZR I’m talking about, a handset available for preorder right now for the price mentioned above. 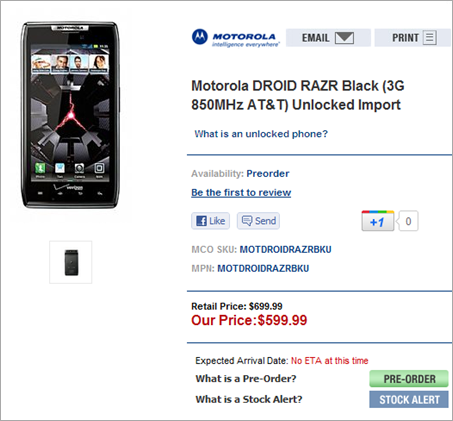 This handset will be launched officially in November with a $300 price tag on contract of course. Moto didn’t mention its plans as far as launches on other carriers are concerned… The thing to know here is that the FCC documents have shown that the Droid RAZR supports GSM Connectivity, so an AT&T debut should come sooner or later.

Mobile City Online takes preorders for the handset in the unlocked GSM version and this model supports quad band GSM and WCDMA bands II and IV. The handset works on AT&T’s 3G network, but no luck getting LTE here via T-Mobile USA ‘s network. Also you must know that this 7.1mm thick device will get Android Ice Cream Sandwich in 2012, as Motorola announced recently.