If you’re looking to get your hands on the world’s thinnest smartphone, it would be a good idea to travel to the UK, since that’s the place where you’ll find the Motorola Droid RAZR starting tomorrow. We’re dealing with a handset that will debut on Clove with a $728 price tag and originally this smarpthone was expected on November 1st. 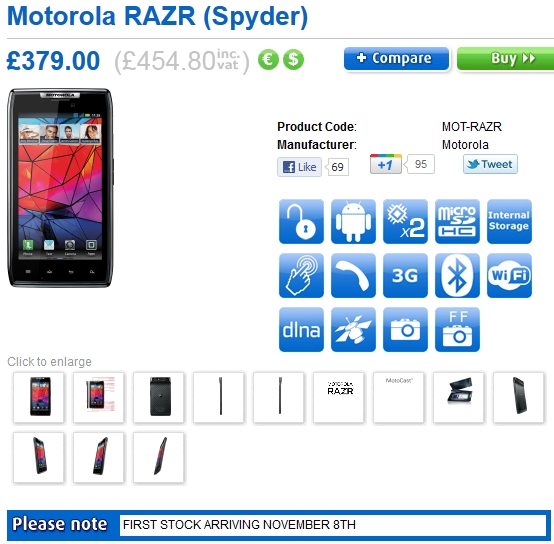 Droid RAZR took off in the same time frame as the Samsung Galaxy Nexus, so that’s why it was a bit ignored at the time. That doesn’t make it less of a revolutionary product, with a kevlar back, powerful dual core CPU, 7.1mm thick case and support for the upcoming Android 4.0 Ice Cream Sandwich. Moto RAZR uses a 4.3 inch qHD Super AMOLED screen and also comes with an 8 megapixel camera with 1080p video recording.

Moto RAZR is also expected to be unveiled by O2 in the UK later this month and if will be interesting to see the battle of this appealing unit with the Galaxy Nexus that’s also coming on the 17th according to rumors. Are you buying one?