Just before the Moto Droid X was launched, we learned that the device was supposed to get an OTA software update, that hit some of the test devices out there. Verizon will release the same update for the available Droid X models out there. 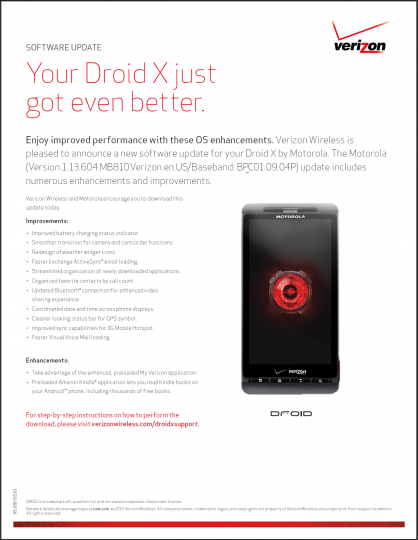 This is not Android 2.2, in spite of your wishful thinking, but it’s still good news, for people who found bugs on their handsets. The update is version 1.13.604.en, bringing stuff like faster/smoother transitions to the Droid X, a redesign of weather widget icons, improved battery charging status indicator and updated Bluetooth connection for enhanced video sharing experience.

Also, the visual voice mail will load faster and sync capabilities for 3G Mobile hotspot have been improved. In case the update is not available on your device, expect it to roll out in the following days.