It’s been about 4 years since Motorola released a proper flagship and I’m obviously talking about the Moto Z here. Motorola Edge+ is finally what we’ve been waiting for, with enough of a degree of innovation to fit the bill. It also came with a sidekick, a “Lite” model if you will, although it keeps quite a few of the attributes of the flagship. Motorola Edge is the name and we’ve unboxed the device below.

Priced at $700, this is a 5G smartphone that debuted at the end of April and comes with 80% of the specs of the Motorola Edge+. It’s made of glass and metal, it’s splash resistant and you’ll notice right away the waterfall display. It’s curved at a very large angle, perhaps not as large as the Huawei Mate 30 Pro, since it didn’t get rid of the buttons. Moto Edge is available in Solar Black and Midnight Magenta, as its main hues and comes with a 9.3 mm waistline and 188 grams of weight. 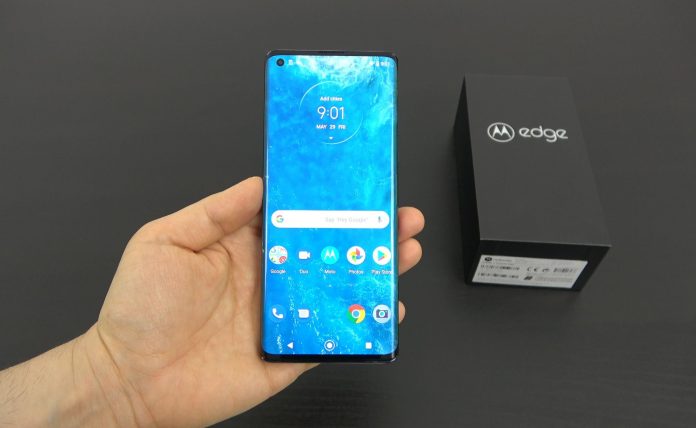 In my hand it felt like a Galaxy S7 Edge and Huawei Mate 30 Pro had a baby, that was as narrow as the Xperia 1 or Xperia 5. It’s very easy grip the device with your entire palm, since it’s quite narrow. It feels like a premium device, well built and it’s gorgeous. The very curved screen may distract you when playing games on the phone or watching videos. Inside the box we find an 18W charger, USB-C cable and a bunch of headphones, which are more premium than usual. 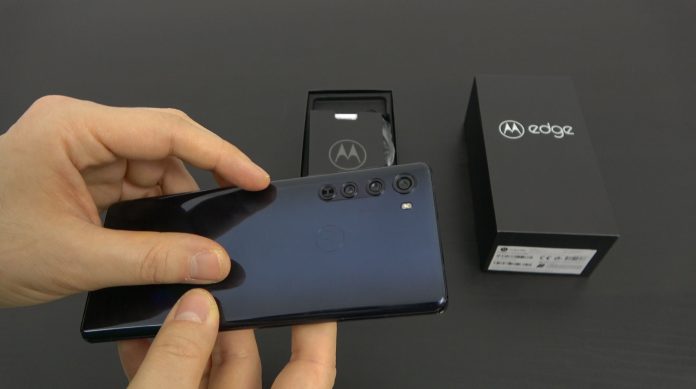 There’s also a manual, case, metal key used to access slots and plugs for the headphones. The arched screen I keep mentioning is an OLED with a 6.7 inch diagonal and a 2340 x 1080 pixel resolution. It has Gorilla Glass 5 protection, HDR10 support and 90 Hz refresh rate. There’s also an optical screen hidden inside the screen and a selfie camera has been cut into it. Inside we find a Snapdragon 765G CPU, which instantly puts this on par with the Oppo Reno 3 Pro 5G, except for the fact it doesn’t have as much RAM.

There’s only 6 GB here, of the LPDDR4X variety. Then we have the 128 GB storage (UFS 2.1) and microSD, plus a 4500 mAh battery, that chargers at 18W. Specs are completed by an audio jack, believe it or not, even though Moto removed it ever since the Moto Z (it popped up here and there on Moto G models). We also get stereo speakers, which is a nice touch and getting to the cameras, upfront there’s a 25 MP with fixed focus and I’m not digging the focus thing. It may be a letdown like the Oppo Reno 3 Pro 5G selfie camera was.

At the back the setup doesn’t sound as impressive as the whole 108 megapixel, 6K filming array on the Moto Edge+, but it’s quite OK:

The camera shoots 4K video at 30 FPS and also comes with a LED flash, plus the usual custom Moto UI and options. There’s Macro, Cutout, Portrait, a Night Mode, AI recognition, Cinemagraph and more. On the connectivity front, we get both 4G and 5G, plus WiFi dual band, Bluetooth 5.1 and GPS. Then there’s NFC and USB-C. The OS of choice is Android 10, in a stock version, with only some gestures added by Motorola and some curved edge actions. 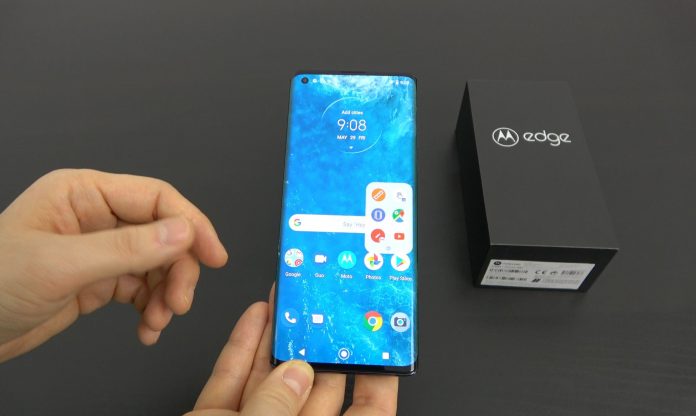 There’s a small menu on the side with Edge actions, much like the Galaxy S Edge menus and the Xperia Edge Assist. There also extra gestures on the edges to trigger functions and features, plus even something called Moto Gametime. Basically it’s a do not disturb menu, plus virtual game buttons on the curved sides, for easier shooting in games for example. My first impressions? It’s a very well built premium phone, feels a bit slippery, but it’s narrow, so it’s easy to hold to.

The back draws lint and prints, but the live wallpaper with waves is dazzling. Also, we finally get a new set of system sounds which I actually did. Looking forward to testing the camera and too bad there’s no faster charge, wireless charge and IP68. You can get the phone here.