Motorola Electrify shouldn’t surprise you as a new handset, but rather a rebranded Photon 4G model. While the Photon 4G was launched by Sprint a while ago with Android 2.3 Gingerbread on board, the Electrify version will come to US Cellular as its first dual core Android smartphone, available starting September 26. 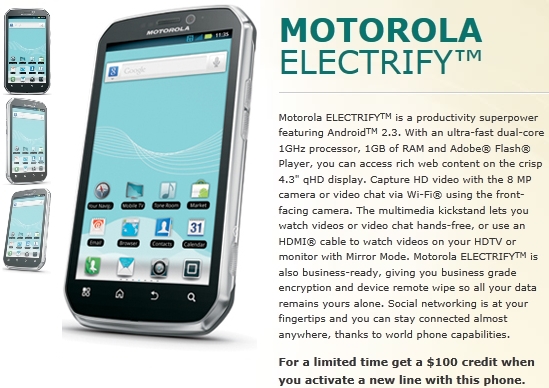 The handset will come with a price tag of $199.99 on a new 2 year contract. The handset comes with a 4.3 inch qHD display just like the Photon 4G, a 1GHz dual core processor, 1GB of RAM, GPS and an 8 megapixel main camera and VGA front cam. 16GB of internal memory are also available, as well as WiFi and 3G.

There’s even an alternative out there for you, on the same carrier: HTC Hero S, yet another qHD Android 2.3 smartphone. No info about this one’s release yet. Should we wait for the next Droid or RAZR or go with this model?