We played with Motorola Moto Z2 Play in late fall 2018 and now we’re back with the text review. It’s a metal body modular machine, with high midrange specs and it’s the follow up to a fantastic battery phone, the Moto Z Play. Launched last summer, the device was tested by us with 5 modules and it’s priced at around $400.

Available in gray, gold and blue, this handset is crazy slim, at just 6 mm. It has a premium build, it’s made of aluminum and uses a 5.5 inch display. It’s kind of on the big side and has a format which reminds me of the Nexus 6. It’s a wide and long phone, with comfy buttons and good feedback. The grip is good and we’ve got an original antenna setup and design. 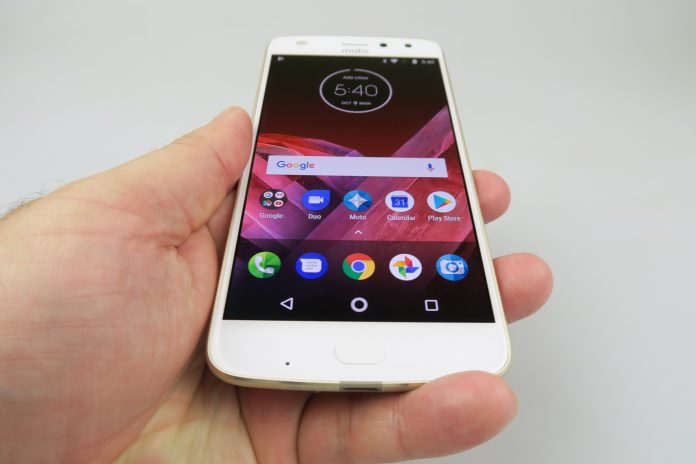 It’s got some RAZR and Droid DNA for sure. There are pins at the back, used to attach the modules. It’s all nice and dandy, but rather massive. Moving on to the display, we’ve got a 5.5 inch Super AMOLED panel with Full HD resolution, 401 ppi, 16 million colors and Gorilla Glass protection. The experience involves colors that pop out, the screen is very bright and the contrast is good, plus the view angles are wide. 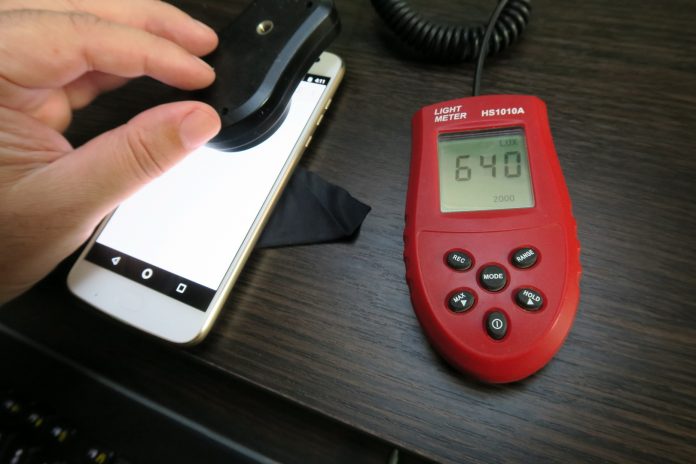 The blacks are deep and the panel is great overall. Pixels have a Pentile Matrix arrangement and the luxmeter showed us a value of 640 LUX, which is fantastic and way above expectations. Back when we tested it, it was the brightest phone ever, minus those with special Sun Settings. The Moto Z Play was at 444 LUX, so that’s a jump. We beat all the latest iPhones and Galaxy S models.

Settings include brightness options and a Color Mode with Standard or Vibrant options, plus font size, display size and it’s all very good, total quality material. Moving on to the CPU, we’ve got a Snapdragon 626 chipset here, an octa core unit clocked at 2.2 GHz, with an Adreno 506 GPU. There are versions with 3 or 4 GB of RAM, 32 or 64 GB of storage and a microSD card slot. 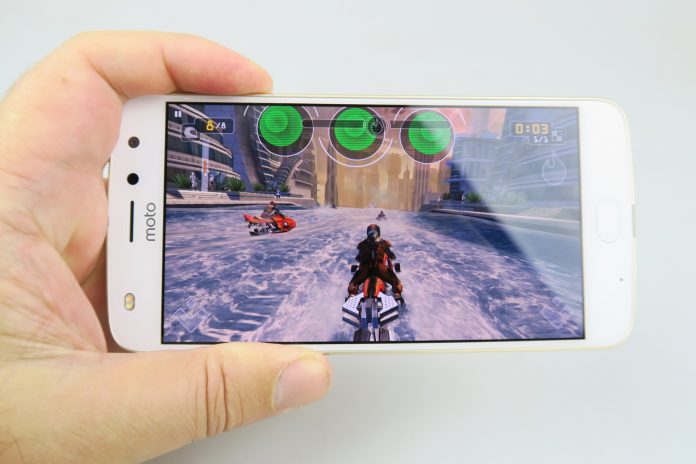 There’s no lag, the performance was great, apps started up fast and Riptide GP Renegade ran perfectly. We also did benchmarks and in Quadrant we beat the Xperia Z3 and LG Nexus 5S, but scored below the Huawei P10 Lite and Galaxy S5. In AnTuTu we scored above the Moto G5 Plus and ZenFone 4, but also below the Huawei P9 and Xperia X Compact. In 3DMark Slingshot Xtreme we surpassed the Moto Z Play and Xperia XA, but remained below the threshold of Xperia XA1 and Galaxy A5 (2017).

It can fight the ZenFone 4 and Huawei P9, plus the P10 Lite. We also did a temperature test and achieved a cool 28.8 degrees Celsius in GFXBench and 34.3 degrees in Riptide GP Renegade, so it’s a very cool phone, literally. Moto Z2 Play packs a 3000 mAh battery, with the promise of up to 30 hours of use. 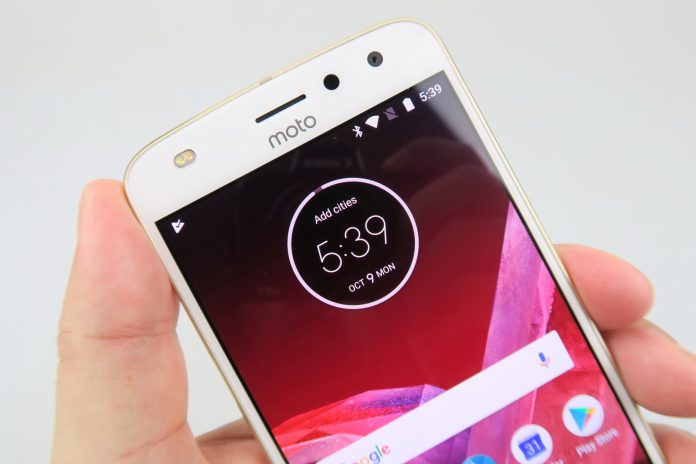 The Moto Z Play packs a 3510 mAh battery, by the way. Moto also promises a 30 minute charge will offer a 50% juice up. We did a video playback test and achieved 12 hours of 54 minutes, which is excellent, basically one full season of Netflix. It beats the iPhone 7 and Huawei P10 Plus, but scores below the Huawei Mate 9 and Moto Z Play with its 18 hours.

PCMark wouldn’t run on this device, which is something that happens often with Motorolas. I would estimate it achieves around 10 hours or so, which is very solid. Charging took 1 hour and 39 minutes, which is good and certainly better than the Huawei Honor 8 and LG G6, while being the equal of the Galaxy S8. We still charged slower than the LG G5 and OnePlus One. 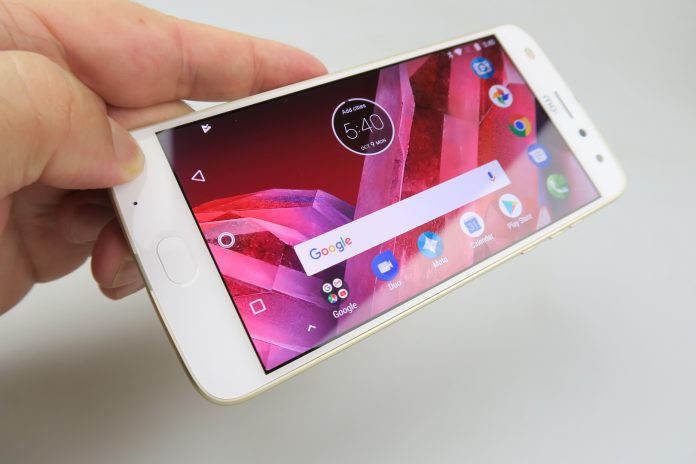 We also did step by step charging, achieving 11% in 5 minutes, 28% in 15 minutes and 53% in 30 minutes. After one hour we were at 88%. There’s also Settings in the mix, with the classical stock Optimization and Battery Saver. Great battery overall. Let’s talk about acoustics now. There’s Google Play Music as the preinstalled player, with options like stock equalizer, with Bass Punch, Balanced, Treble and Vocalizer options.

There’s also 5 custom channels and all of those are put to work via a single speaker at the top, the earpiece basically. The listening experience involved a pretty loud sound, clear too, smooth guitar and a good bass. Acoustics were great all around and the speaker wasn’t easy to cover. Stereo wouldn’t hurt, to be honest, but maybe on the Z3 Play. We didn’t get bundled headphones, but we do get FM radio. 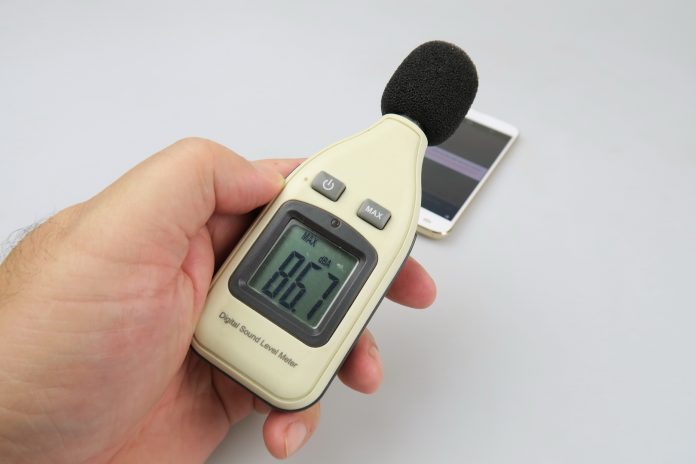 We also did a decibelmeter test and achieved 86.7 dBA at the top, which beats the Galaxy Note 8 and LG G6, but scored below the Xperia XA. When the phone faces down, we reached a mere 71 dBA, not very encouraging, to be honest. We also tested the phone with Riptide GP Renegade and achieved 91.4 dBA which is good. It beats the Huawei P10 Plus and Moto G5, but scores below the Nokia 3 and Xiaomi Redmi 4. There’s also a Power Up Sound option there. 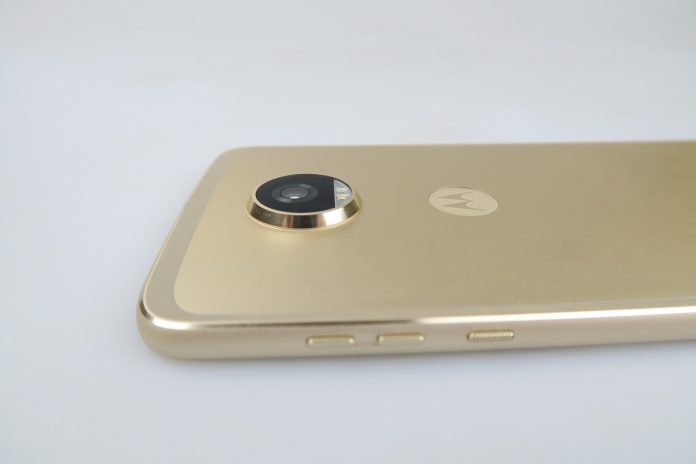 Time to talk about the camera. We’re dealing with a 12 MP shooter, with F/1.7 aperture and Dual Pixel technology. It’s got laser focus, PDAF and a dual LED flash. There’s also 4K video capture and I’ve heard a source saying that this is actually the same camera from the Galaxy S7. The camera app offers a fast start, fast picture taking and the camera itself focuses quite fast. 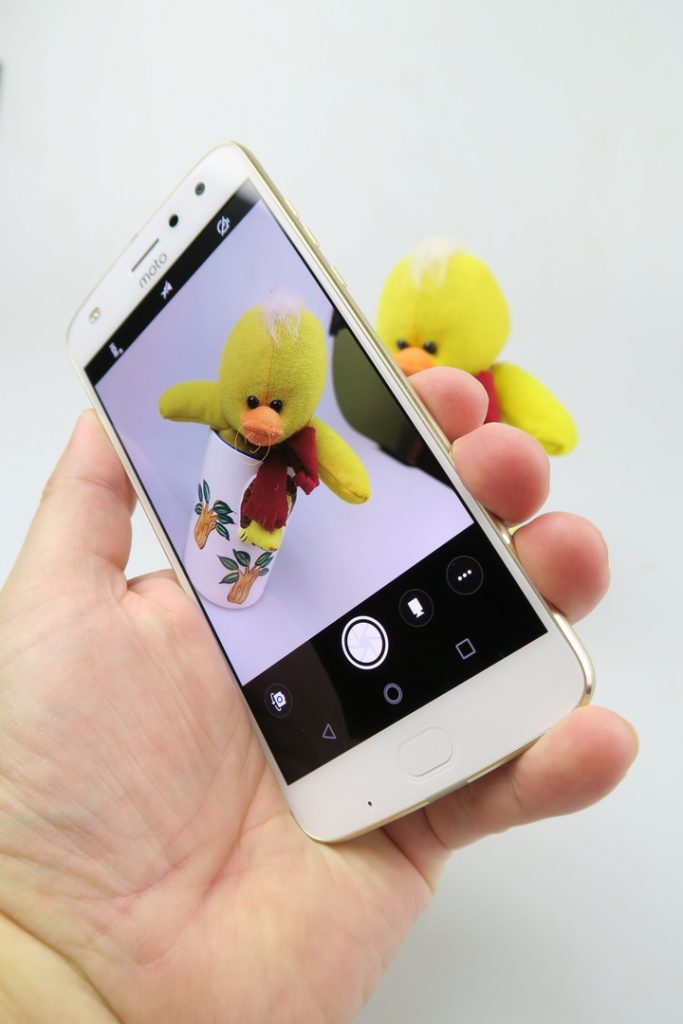 The UI is pretty much stock Android affair, with things like Panorama, HDR and Slow Motion. There’s also a manual mode, with tweaks like exposure, ISO, white balance, focus, even shutter. Time to check out the gallery, starting with the day time pics. Colors are well calibrated, especially the green and selfies are OK I’d say, in spite of the burnt background. Clarity was top notch and the colors and details too. 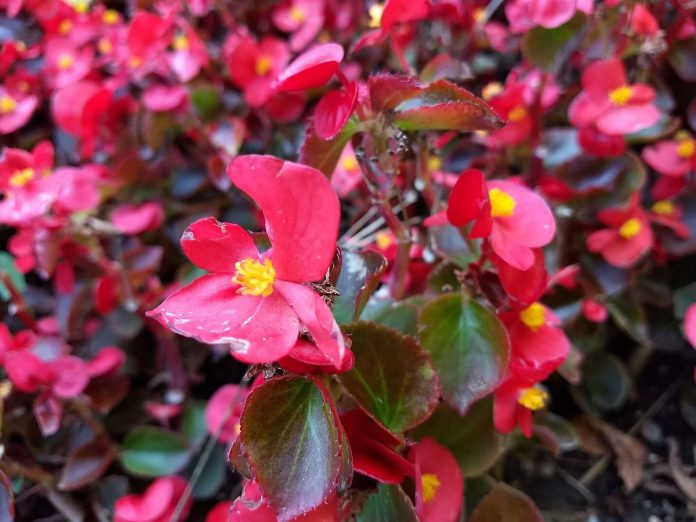 I loved the texture, though and the brightness is also solid. The zoom makes you achieve only so so details. Brightness is solid all around, perhaps too bright at times. When zooming into the shots on the PC, the details were rather “meh”, that’s the word I’d use. I loved the focus play with that metal acorn, either on the foreground or background. 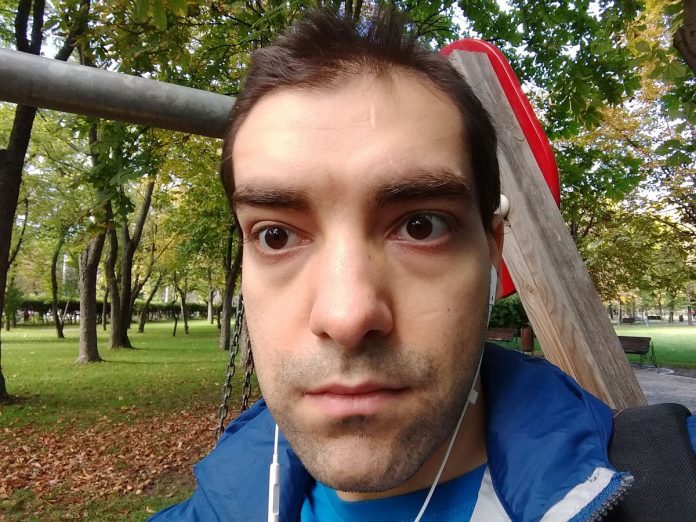 Several pictures experienced some blur, which kind of cuts the Galaxy S7 camera theory. Closeups are very solid and clarity was good overall. Some backgrounds were too white because of the sun and in the end the selfies grew on me. The reds and greens were great. Closeups take a bit to be pulled off, I mean time wise. HDR is OK and solves some problems with contrast, exposure and dynamic range. 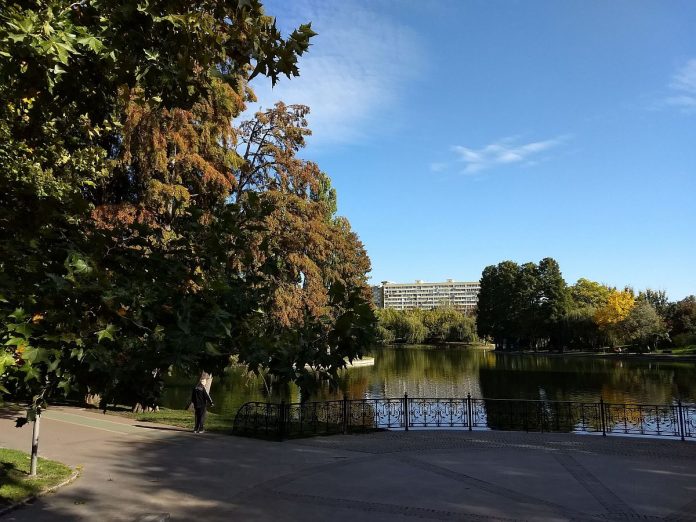 I’d say it’s all inferior to the Galaxy S7 and more on par with the ZenFone 3, or the Huawei P10 Lite. I also feels it’s slightly below the Huawei Honor 8. In low light conditions we registered a good, actually great flash and colors. There’s a bit of a white fog floating around though, in some shots and the zoom was rather poor. It’s a very pragmatic camera, halos are rather OK and there’s some pink here and there. 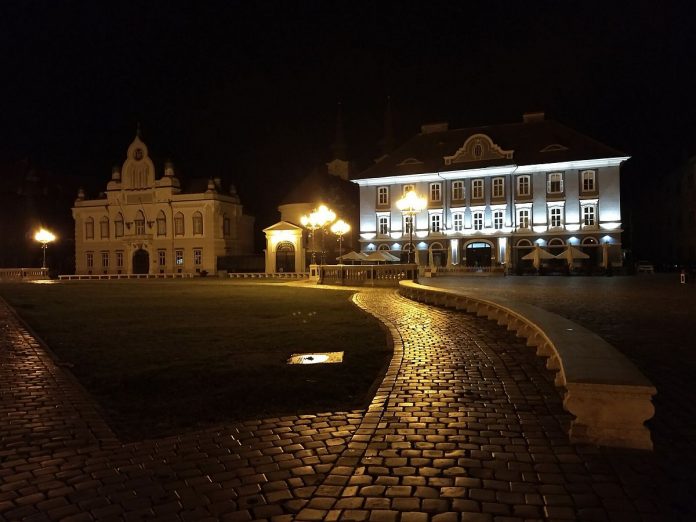 Not much yellow abuse happens here, which is OK. I’d put the low light capture on par with the Huawei P10 Lite or P9 Lite 2017, but not more. I loved the building contours, closeups and texture, but it’s also true that every once in a while you’ll run into a blurred shot. Just a midranger being a midranger after all…

As far as video goes, we shot MP4, Full HD, 30 FPS and 17 Mbps. Sadly, the sky ended up turquoise for some reason and we also had burnt areas, but the colors were niftly calibrated. There’s clearly no stabilization here and the dynamic range in the background is rather troubled. Focus and clarity were top notch in the 4K video capture, so you’d best focus on that. Exposure change was excellent, when the time for it to be put to the test came.

Zoom was OK up to 3X and the microphone didn’t quite break records when the wind started. I loved the focus change, from closeups to distance objects, but speaking of distance, the details in the far distance were underwhelming. Still, I find this video capture superior to the Motorola Moto Z Play. Things are also less shaky than the predecessor.

I’d put it on par with the P9 Lite and P10 Lite, maybe below the Galaxy A5 (2017). In low light conditions we shot clips with some motion blur when panning, big street light halos and flicker, plus yellow areas. Refocusing also happens, so you can tell I’m a but unhappy with it. Strangely, the zoom in left details OK. I’m not impressed and I felt the same bitterness as the ZenFone 4 low light capture.

At least things are brighter than what the rivals achieved and less yellow than the Moto Z Play. I find the Huawei P10 Lite better in low light video capture, but at least we beat the P9 Lite (2017). Overall, some underwhelming aspects kind of spoil the party for Moto and leave us wanting more. We also did a browser test, with poor benchmarks, a mediocre loading speed and a stock keyboard with Swype available. 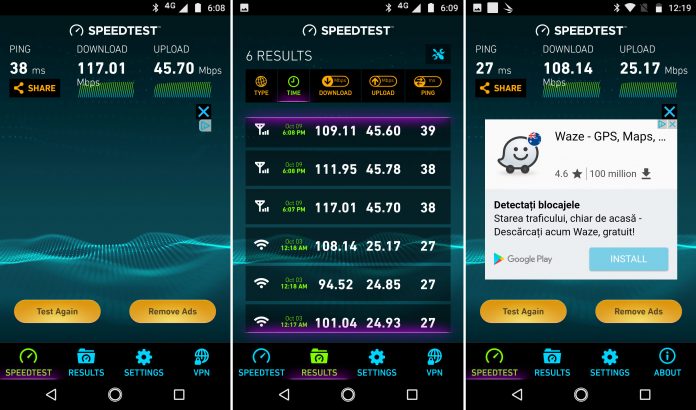 On the connectivity front, there’s a nano SIM card slot, Moto Mods pins, USB Type-C, audio jack and 3 microphones . NFC, GPS, Glonass, WiFi a/b/g/n/ac dual band, 4G LTE with 19 bands and Bluetooth 4.2. WiFi Direct is also here, while the calls were loud and clear, as Moto usually delivers. Good noise cancelling too. We also did a SpeedTest and achieved 117 Mbps in 4G downloads and 45 Mbps in uploads, while on WiFi we got to 108 Mbps download and 25 Mbps in upload. All of those are great.

The software we ran is Android 7.1.1, in a very clean version. We also have an Always On Glance feature, which activates at the smallest movement. Multitasking via carousel and split screen are available here, plus the Google Now leftmost homescreen. There’s also a dropdown section with Quick Settings and notifications. Keep the screen pressed and you’ll trigger the widgets, wallpapers and settings, once again stock. 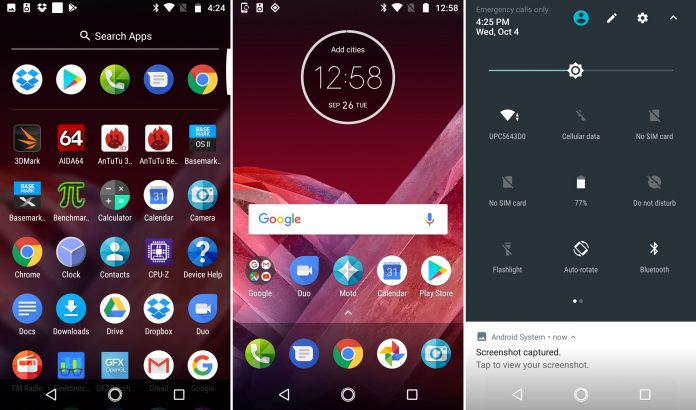 Settings include on body detection and options for Moto Mods. The fingerprint scanner has a 12 step setup and is rather fast and accurate. There are 29 apps preinstalled here and they’re all stock, I’d say. There’s Drive, Maps, Play Music and so forth. The Moto app we have preinstalled lets you do chop and twist movements to trigger actions. Moto Voice is also here for control via vocal commands.

We analyzed everything that needs to be analyzed, so let’s see the verdict. 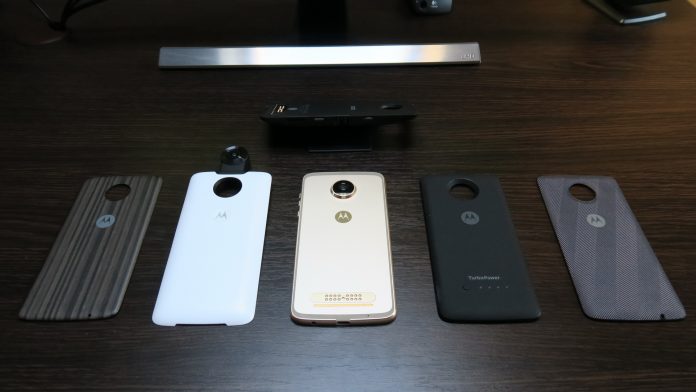 This a premium built midrange smartphone which can have modules attached and it provides a premium build. It’s got a bright screen, OK camera and battery and since it sometimes bundles the module, their price is not that big of a problem anymore. The problem is that the price is closer tot he ZenFone 4 and Honor 9, which are a bit better overall.

It basically competes with some 2016 flaghips, it’s very slim, but also makes some compromises, medium ones, not huge ones. The type of module you get bundled may end up deciding this purchase. You can get the phone here.