If you’re looking for the mass market version of the Nexus One Google phone, HTC Desire is the answer. This phone, previously known as HTC Bravo will be announced today during MWC 2010 and you should know that we’ve just come across its first official image, that was leaked together with its specs. 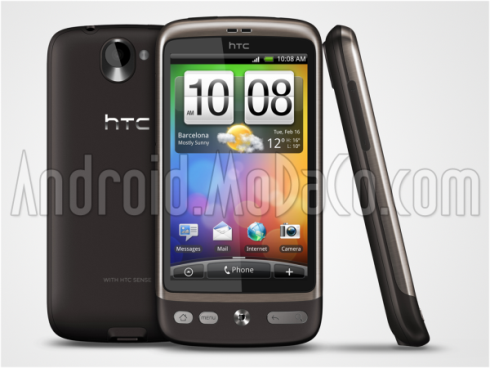 A 5MP camera is present at the back, complete with flash and autofocus, while the specs list of the HTC Bravo also includes HSPA/WCDMA support, quad band GSM/GPRS/EDGE connectivity, an optical trackball, GPS, a microSD card slot and Bluetooth 2.1.

We should also mention that this Nexus One twin uses a proximity sensor, an ambient light sensor, a digital compass, a G-sensor, WiFi, a 3.5mm audio jack and a 1400 mAh battery. HTC Desire official launch coming up… in a couple of hours!