Samsung may not have had some flashy event in Barcelona, but still they were there and they had a booth filled with goodies, such as the new Galaxy Note 10.1 and the Samsung Galaxy Beam projector phone. The latter was checked out by our editor, Zsolt, reporting for us and a couple of other sister sites. The handset looks quite hot and certainly hotter than other prototype projector phones. 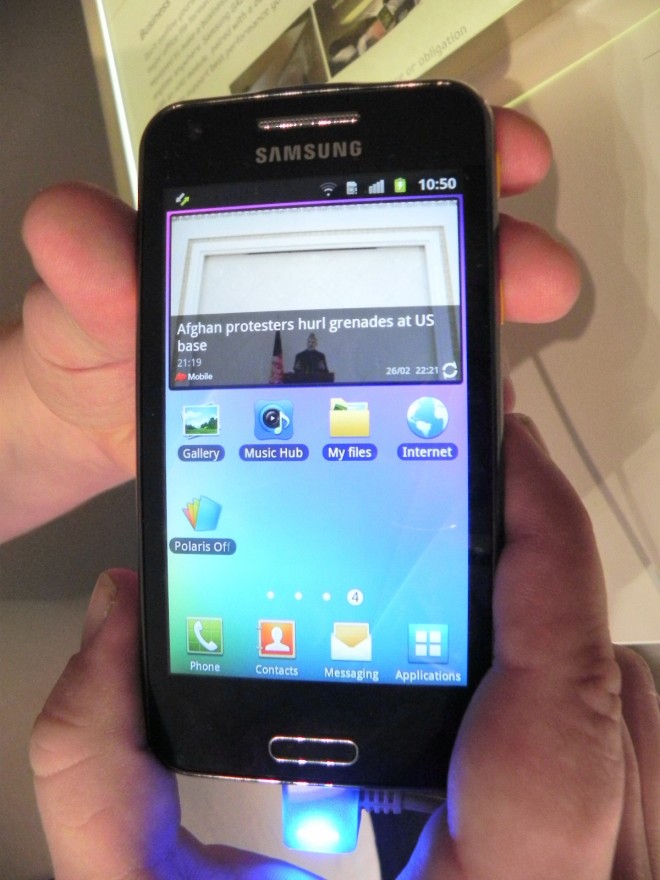 I’ve seen other projector phones in the past, but they failed to take off on the commercial market. The Samsung Galaxy Beam comes with a cheap-looking plasticky yellow case, as shown here, but there’s more to it than meets the eye. For one thing, if I’m not mistaking the folks in the video said that this handset can project images for about 2-3 hours, which is very cool, so it’ll last you a couple of PowerPoint presentations. And now here’s the hardware for this phone:

The real interesting thing here is the 15 lumen projector, that’s able to shoot a 640 x 480 pixel images up to 50 inches in diagonal. 15 lumens may not mean much to the conference room corporate suit, but it’s still a decent replacement for your laptop that just broke down, right? The lamp of this projector should provide up to 20,000 hours of use, which is very OK by projector standards. I’m curious if this phone will die out like the rest of the devices relying on pico projectors of if it will take off this time.