After the big time leak of the info concerning 4 Nokia Symbian models, it’s time to see some pictures. These are images of the Nokia 700, also known as the Zeta. They came from a GSMArena tipster, who didn’t reveal his identity. 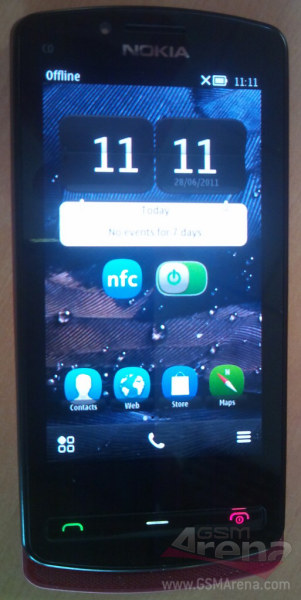 Strangely enough, the source didn’t confirm if there’s really a 1GHz CPU inside, but he detailed the rest of the specs. We’re dealing with a Symbian Belle unit, that packs a 3.2 inch nHD AMOLED display, that makes us believe this is a Nokia C6-01 successor. Nokia 700 (also called Nokia N7 by some) weighs a bit over 80 grams and it will measure 10mm in thickness.

This model features a 5 megapixel camera with LED flash, NFC connectivity, WiFi b/g/n, HSPA and a 1080mAh battery. That’s where the source of info stops with the details, but presumably Nokia wants to make this the “thinnest smartphone ever”, although they’ll have to cut at least 3mm from its waistline to do that.