Nokia 808 PureView is famous for its 41 megapixel camera, that sent it to the top of the news during the Mobile World Congress 2012 event early this year. The device is available in black, red or white and it’s priced at around $650 on Amazon. It was announced in March and launched in June and we’ve received for testing purposes. We’re taken the cameraphone to the concerts, to the mountain and to the city, testing its power. What came out of it you’ll see immediately. 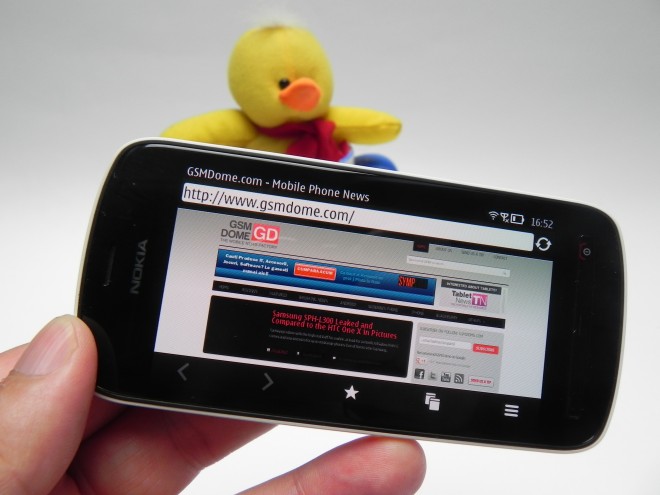 Dubbed as the follow-up to the Nokia N8, Pureview 808 measures 13.9mm in thickness and weighs 169 grams, so it’s a pretty bulky device. However, unlike other models with a thick waistline, this one is more discrete about it, so the camera bulk won’t get in your way. The device took 5 years of work and even involved NASA technology for zooming digitally. The handset has a nice texture at the back and it comes with a matte case and grippy feel. There’s an NFC chip right under the battery cover and also under it you’ll find the battery, micro SIM slot and microSD card slot.

At the top we find the HDMI port, audio jack, microUSB port, while on the sides we find the volume buttons, camera button and the lock/unlock screen slide key. At the back we have the camera sensor area and right next to it there’s the speaker, Xenon flash and LED flash. At the front of the phone we have a 4 inch display, an AMOLED one with Gorilla Glass protection and supporting a 360 x 640 pixel resolution. This is a ClearBlack screen, in case you’re wondering. The phone is equipped with Dolby technology and special settings, that you’ll see in the video review below, when we listen to music. 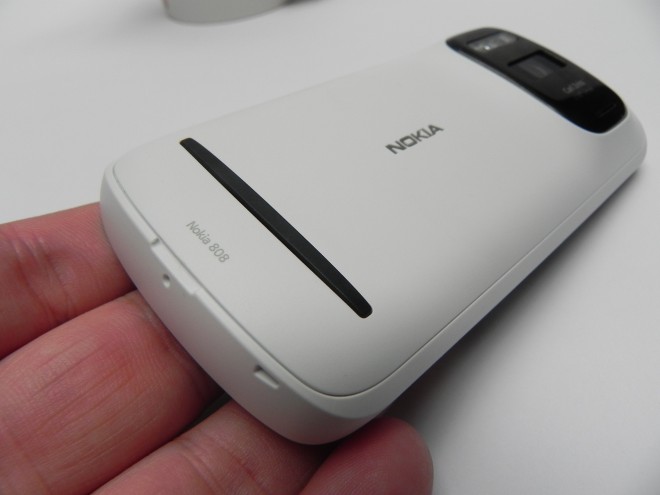 The headphones are impressive as they in-ear part has a special angle for sitting perfectly in the ear and they certainly do and offer a marvelous experience. Nokia 808 PureView offers 16GB of storage, 1 GB of ROM, 512 MB of RAM and supports HSDPA 14.4 Mbps connectivity, DLNA, WiFi, Bluetooth 3.0 and NFC. The camera at the back is a 41 megapixel sensor, with Carl Zeiss technology, autofocus, 1080p 30 fps video capture and there’s also a front VGA camera able to do 30 fps as well.

Under the hood there’s a 1.3 GHz processor, an ARM11, with a Broadcom BCM2763 GPU. Finally, there’s also an accelerometer among the specs, proximity sensor too, compass and Stereo FM radio. The device even has an FM transmitter, so you can listen to music from the phone via your car stereo system. And we’ve got GPS, obviously, that works just fine with Nokia Maps. The power source of this cameraphone is a Li-Ion 1400 mAh battery, good enough for 42 hours of music playback, 11 hours of talk time or 3 hours of camera use. 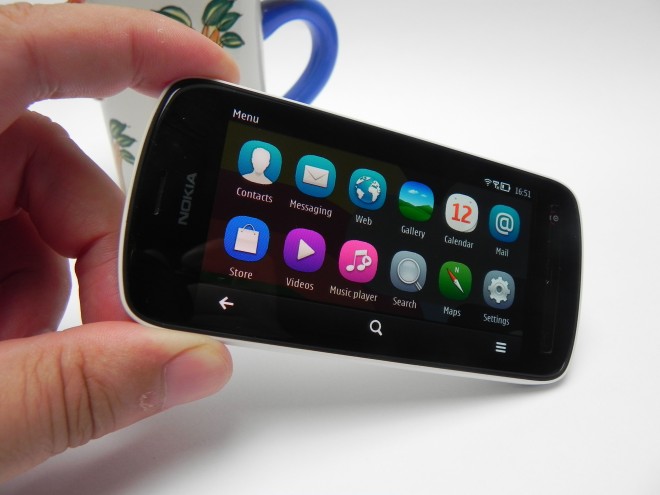 On the software side we’ve got Nokia Belle Feature Pack 1 and we show you the browser and virtual keyboard in the review. We went with the Swype keyboard, that’s actually quite comfortable, while the browser still feels a bit old and out of fashion. You probably know what Nokia Belle means: up to 6 home screens with different wallpapers, 5 sizes of widgets, new widgets, a pull down status bar and the bottom 3 virtual buttons. Those are the Menu, Home Screen Settings and Dialer.

I forgot to mention that below the display there’s a bit plastic button, that is actually 3 buttons in one: call, end call and Menu. Keeping pressed the Menu button will trigger the task manager, a horizontal list of previews for the apps that are open at the same time. The thing that hits you right away is the lack of apps from the Nokia Store, but at least this phone comes bundled with tons of apps. Moving on, call quality on the device is excellent, all of that courtesy of the noise cancelling microphone, that brings its extra support to the call clarity and quality. 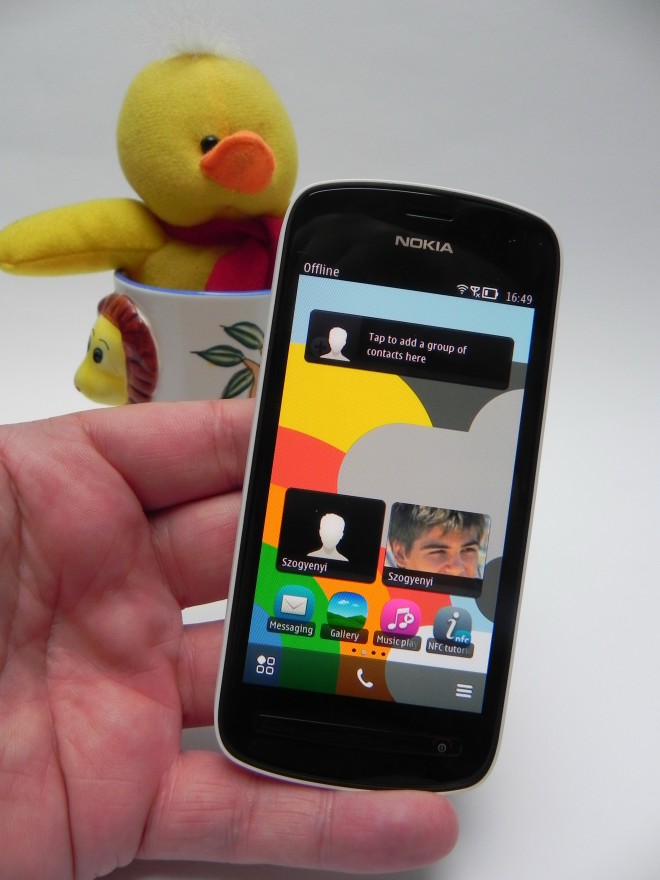 I was very impressed with the audio playback on this phone, both on the speaker at the back and the headphones. Both offer stunning quality, great volume and great bass, even beating the HTC Beats headphones, by a mile even. On the video side, playback looks great, colours are good and the viewing angles are decent. The display is also pretty good in sunlight, something you really need on a top notch cameraphone. And finally we reach the CAMERA, the big selling point of the Pureview.

This 41 megapixel sensor is a 1/1.2 inch one, that’s 2.5 times bigger than the camera sensor on Nokia N8. The camera has its very own ISP and the secret behind it is oversampling technology, that gathers 7 pixels into one pure pixel. Thus, you get lossless zoom and that’s inspired by satellite technology. The lossless images are achieved without moving optics, aberrations or distorsion, a great achievement for modern technology. In the Pureview Mode you’ll do 3X lossless zoom with ease in stills and in video you’ll even reach 12X in 360p mode. 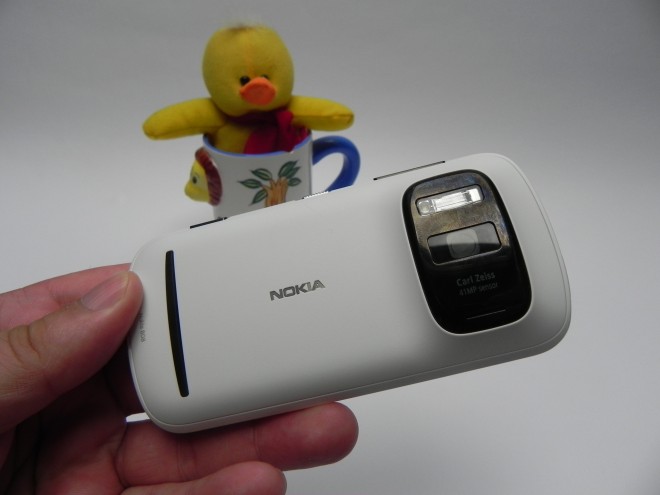 When shooting with the 38MP/34MP settings you won’t get zoom. The camera UI is very simple and intuitive and if you want quick snaps, you must jump straight to Automatic Mode. The other big modes are Scenes and Creative. The scenes mode offers the following options: portrait, night portrait, night, closeup, landscape, snow, sports and spotlight. The 5MP automatic setting is the one supposed to offer the most vivid colors and best contrast. The creative mode is responsible with the most natural color reproduction.

Back to the Scenes, in Portrait mode the emphasis is put on the flesh colour and focus goes on the face of the subjects. In Snow mode exposure is increased and in Spotlight you will be able to photograph a subject when he’s in the bright lights of a scene, for example. In the Creative mode you can take 38MP 4:3 shots or 34MP 16:9 ones, depending on the aspect ratio you choose. The Pureview Mode offers the ability to take 3, 5 or 8 MP 4:3 shots, or 2, 5 or 8 MP 16:9 shots. There are 3 custom modes: C1, C2 and C3, each one able to memorize your favourite settings, so you won’t have to set them up each time. 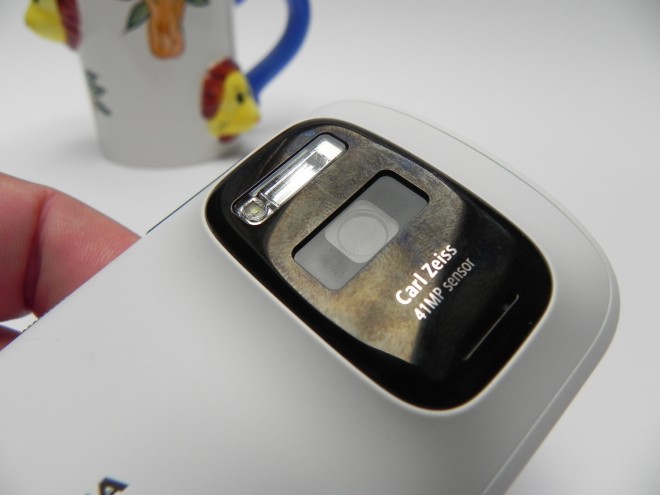 There’s also an option called Capture, that handles bracketing. This one allows you to take 3 or 5 images with a preset range of exposure settings. What I noticed right away is that the Pureview lacks a HDR mode and a Panorama mode, as well as a Burst shot. You can take some burst shots, but the time between them is pretty big. When taking pics there are 5 options omnipresent on the screen, on the left side: flash, exposure (with histogram), white balance, ISO and ND Filter.

The ND Filter aka Neutral Density Filter prevents overexposure when there’s too much light around. Nokia says that the focus of the camera goes from 15 cm to infinity and I wasn’t able to create very close macros sadly, so you won’t take the crazy cool pics of flower petals with rain drops on them with this phone. It will just be a blurry mess, sadly, so the macro only works from a bit of distance. The biggest deal about the camera is that it performs really, really well in low light.

On the video side we can do 1080p video capture at 30 FPS and the result will be an MPEG4 20 Mbps file, that looks great. We have some samples included in this review, right here. Another appealing thing is the Nokia Rich Recording, the ability to record great stereo sound when you do video capture. The result is CD like quality, with a 128 kbps stereo experience and 48 Khz sampling. In the end I have to say that this camera is great, simply stunning and you won’t feel the need to reach for your point and shoot cam if you own this phone.

Now for the verdict, on the plus side we have the camera, the great audio and video quality, the friendly design, very good flash and low light behaviour of the camera and very simple UI. Many bundled apps and incredible audio/video recording are also appealing points. On the cons side we’ve got the old, slow and pretty bad OS, compared to nowadays’ options and I’m talking about Belle here. The most frustrating thing about is that at some points when you install an app you’re stuck with the “Installing” screen on top and can’t really use your phone. Also, the device is kind of bulky and the battery doesn’t last as long as I’d like. And finally the price may frustrate you, so these are all the pros and cons related to this Pureview phone.

We give it a 9 out of 10 for design, 10 for hardware and 7 for operating system and UI. The total grade is 8.66 out of 10, making this a must buy cameraphone, but only for camera aficionados and people who can tolerate Symbian in its newest form.