While watching the mediocre and Eagle Eye-like “Echelon Conspiracy” movie, we were stunned by a very hot handset, shown during the picture. It looked very much like the Nokia Aeon concept and it was even shown running various apps. The mystery device makes an appearance in the movie’s trailer, available below:

While searching for “that green Nokia concept we loved so much”, we found out that Google now offers an Image Search color picker, allowing you to pick a certain colour while searching for images. Thus, the search for the “green Nokia concept” was made very easy. We’ve taken some shots of the device, as it was pictured in the movie and we have to say that it resembles the Aeon very much, as far as build is concerned.

We noticed that the touchscreen is divided into 2 segments, with the aid of a metallic stripe and that the upper side of the screen is transparent, just like the keypad of the famous LG GD900 handset. Could this supposed Nokia newcomer be an LG phone after all?

Meanwhile, we return to the movie, just to let you know that we’ve seen the mystery device’s features shown on its screen, stuff like messaging, mail, searching, calendar, a browser, a weather app, stocks and settings. Also you should know that in “Echelon Conspiracy”, the phone was called “GZT 650”.

Talk about product placement… Nokia 5800 was shown in “The Dark Knight”, so could this be yet another case of advertising before the official announcement? 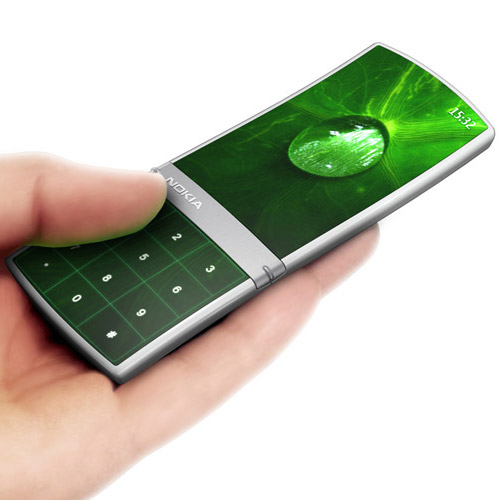