Nokia Asha 303 is part of the low end-ish quartet of phones announced last year at Nokia World 2011. This model is a touch and type one, advertised through preinstalled Angry Birds, among others. The handset comes inside the classic blue box and it has a sticker of Angry Birds glued to the display on the handset. 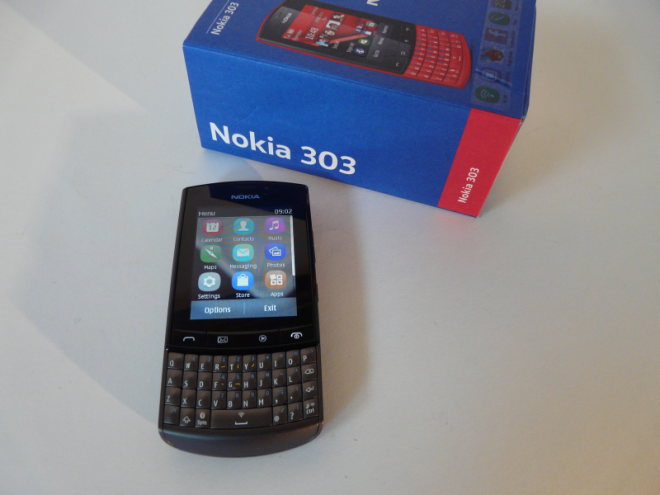 Inside the box of the Nokia Asha 303 we find the usual charger, a pair of headphones and manual, without a trace of a microUSB cable, which is odd, since I could really use one to transfer my pics from this device. We’re dealing here with a low end model, that still manages to pack social networking features like Facebook and Twitter and offers a TFT touchscreen with a 2.6 inch diagonal. In the following days expect a full review of the phone, with more details.

It’s interesting to see phone from the low end segment with a 1GHz processor, but if there’s one company to do this, then that’s Nokia. The Nokia Asha series is designed for developing and emerging countries, so at a lower price point it gives you the features of a mid end phone and sometimes even a smartphone.