This is just like Nokia, to launch two new handsets a day before Apple makes a big announcement. It seems that the Finns will debut two new models of the Cseries on January 26, a day before Apple supposedly unveils the iTablet and iPhone 4.0 OS. 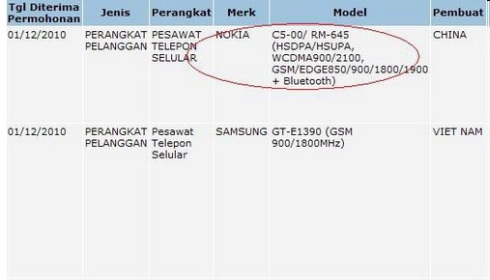 The Nokia launch was already confirmed by the folks of Pocket-lint and Eldar Murtazin, so it’s pretty much a sure thing by now. The model names are Nokia C3 and C5, recently spotted in Indonesia, as you can see in the image above.

Nokia C3 (C3-00 or RM-614) supports quad band GSM connectivity, Bluetooth and WiFi, while Nokia C5 (C5-00 or RM-645) doesn’t support WiFi, but it comes with HSPA. Some sources even mention a third device to be launched next week, the Nokia N87 12 megapixel cameraphone, but this would be too much for one day, right?