Two years after launching the successful online service Mosh, Nokia decided to close it down. Mosh was all about “people power”, as users could post everything they wanted on the networking site. 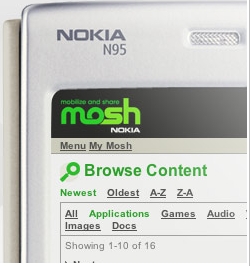 Accessible here, this service is basically a simple website that can be accessed from any feature phone, smartphone and even a PC. There’s no official shutdown date for Mosh, however, we do know that Nokia will be launching its Ovi store in May and that the Finns will merge the app Download! store with Mosh and WidSets (widget service).

To give you an idea regarding the popularity of the service, it has reached 137 million downloads till now and the whole project moved way slower than the Apple App Store, albeit without marketing. Will the reborn Ovi Store replace Mosh and upgrade it, making the users of the soon to be dead site faithful to Nokia’s plans once again?