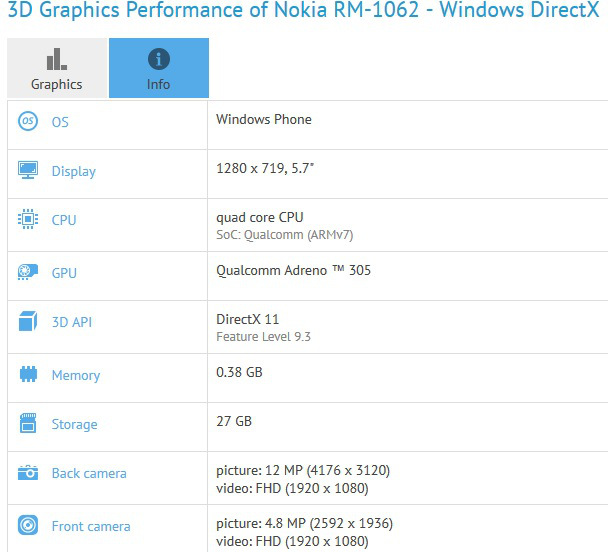 We’ve been hearing about a potential Lumia 1530 for a while now, but every once in a while there was also the leak of a Lumia 1330, making us believe we’re about to get a pretty solid and affordable new phablet. Today that device was spotted in GFXBench, complete with a list of specs.

The newcomer is codenamed RM-1062 and brings a 14 megapixel camera, among others. It also offers a 5.7 inch screen with a 720p resolution and it runs Windows Phone, in an unspecified version. The device relies on a quad core Qualcomm processor, probably a Snapdragon 400 or 410, if I were to guess. There’s DirectX 11 support on board, 32 GB of storage and apparently a pretty low quantity of RAM, 0.38 GB according to the benchmark.

Of course, in real life we’ll probably get 1 GB. The back camera is said to be a 14 megapixel unit, plus we’ll also get a 5 MP selfie cam. The same model has been seen passing US certification and FCC certification, in both single SIM and dual SIM versions. Look forward to a MWC 2015 or even CES unveiling!