Although the Nokia Lumia 800 has barely been out for a couple of weeks (and selling well), the Nokia Lumia 710 is nowhere in sight, at least as far as official launches go. However, it appears that T-Mobile is preparing to launch the phone this Wednesday during a special event, as confirmed by the folks of The Verge. There’s also a press shot below, confirming the T-Mobile association of this handset. 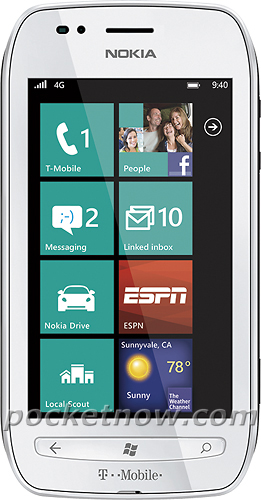 This is the lower end model of the first two Windows Phone devices launched by Nokia and its design resembles greatly the Nokia C7. Its specs include a 3.7 inch display, a 5 megapixel camera, a 1.4GHz single core processor and Windows Phone Mango 7.5 as the operating system. T-Mobile will offer the Lumia 710 in black and white versions, plus they will come with interchangeable back covers, for a touch of originality. Nokia Lumia 800 has yet to reach the US soil, but when it does it’s rumored that it will come with LTE radio and prefer AT&T as the carrier launching it.

A CES announcement is expected next year and in the meantime we’re following the rumors on the Nokia 900, yet another flagship device that’s expected with Windows Phone and possibly the most high end specs of this trio. The handset is expected to offer a 4.3 inch screen, 1.4GHz processor and the same industrial design as the Lumia 800, or the Nokia N9 for that matter.