Nokia Lumia 710 is the lower end side of the Lumia trio that was announced by the Finns over the past months. The Lumia 800 debuted in October, while the Lumia 900 was recently announced and the former also had a partner at launch time: Nokia Lumia 710. This model is available on T-Mobile among others and it comes with a variety of back case colours: yellow, blue, white and pink. We’re checking out the yellow model in the review below: 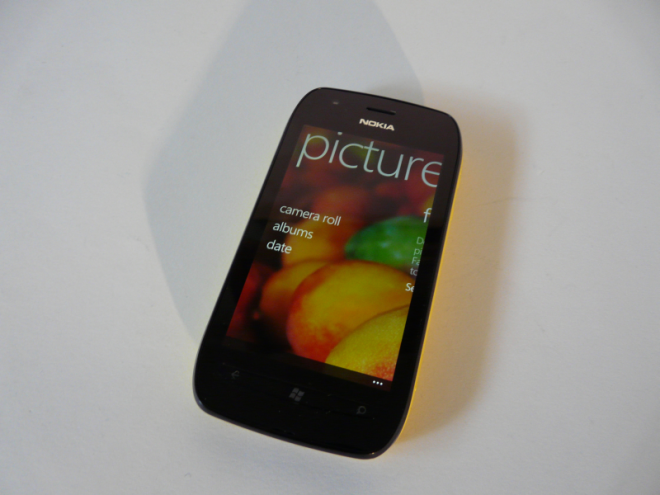 Nokia Lumia 710 measures 12.5mm in thickness, weighs 125.5 grams and features a 3.7 inch display with the usual resolution of 480 x 800 pixels that we’ve seen on so many Windows Phone units. The display here is a TFT ClearBlack one, with Gorilla Glass protection and if you must know, the list of features for this affordable Lumia also includes 8GB of storage, 512MB of RAM and a 1.4GHz Scorpion CPU and Adreno 205 GPU. No trace of a microSD card slot or a secondary front camera, for that matter. However, we do get a main camera at the back, with a 5 megapixel sensor, autofocus, LED flash, geotagging, face detection and 720p 30 fps video capture that’s not bad at all.

On the connectivity side we get HSDPA (14.4Mbps), WiFi and Bluetooth 2.1, while the Nokia Lumia 710 also comes with an accelerometer, proximity sensor, compass, stereo FM radio and A-GPS. The device runs Windows Phone 7.5 Mango and has a 1300 mAh Li-Ion battery good enough for 7 hours of talk time. We also get noise canceling technology here for great call quality and a microSIM slot, keeping up with the trend of the iPhone 4S, Nokia Lumia 800 and Nokia N9. I have to talk about the design, since that’s a pressing issue here… 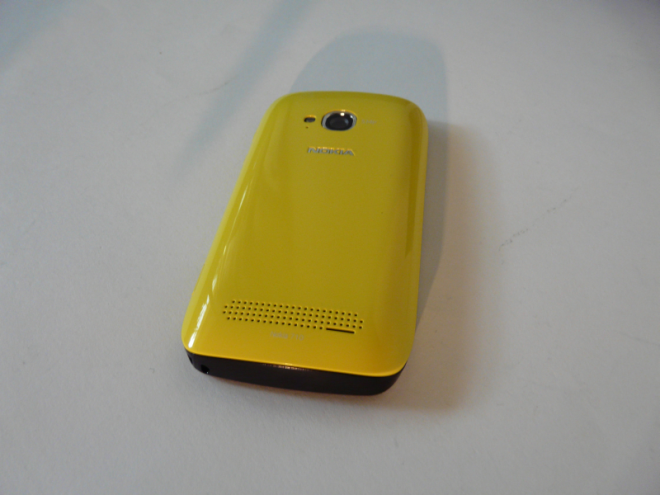 The back side of the Lumia 700 reminds me a lot of the Samsung Corby… it’s the same idea of teenagers wanting to change the look of their phone over and over again. Thus, they switch the “jacket” with another one, a different color and express themselves otherwise. The problem here is that the back side cover also incorporates the camera and volume buttons, that aren’t very comfortable to use when they’re so plasticky. Also, the whole device feels cheap and fragile because of this plastic cover. Honestly, what was Nokia thinking?

On the side we have this elongated button below the display, divided into 3 buttons, the usual ones for Windows Phone: Back, Home and Search. Keep Back pressed and you’ll trigger the multitasking section, that shows you the apps that are running at a certain time in their suspended status. Nokia Lumia 710 has a pretty underwhelming audio experience and I would have expected more from its back speaker. On the video playback side everything is OK, provided that you’re willing to stand converting all the files you want to play on the phone through Zune.

There’s also the ability to listen to radio, podcasts and watch YouTube videos. I must mention a nifty little app that comes with the phone, called Lumia Music. This one makes the phone’s display light up in various colours once it hears any sound, including your voice and other sources of music. Little tiles of light will flood the screen, but you can also switch to another visualiser by tapping the display, if you want to. Imagine a bunch of teenagers wit Nokia Lumia 710 handsets in hand and all of the phones lighting up to the sound of the music. 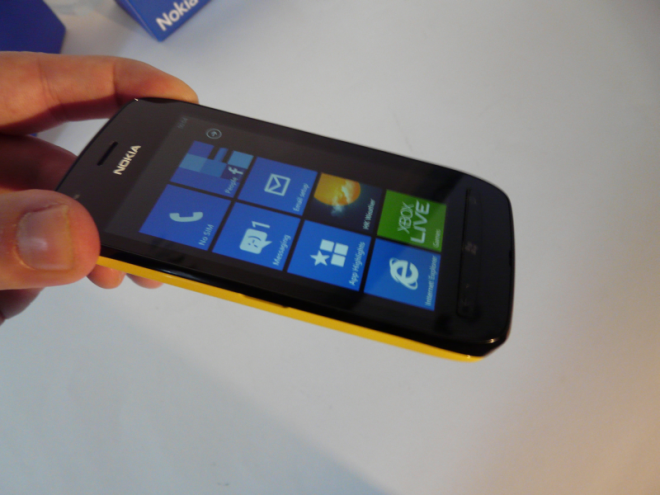 In case you’re wondering about social networking, that’s available as well, either through the People Hub, that integrates both Facebook and Twitter, or through their dedicated WP apps. I found the Twitter app for WP7 particularly easy to use and very intuitive and fast with updates and refreshes. Windows Phone Mango also brings the upgraded Internet Explorer with the browser bar at the bottom of the display, a feat that some people dislike, including myself.

Still, the browser is reasonably fast, although it doesn’t quite shine in comparison to Safari Mobile for example. You can use this handset to view Microsoft Office files, that you can easily edit and store in the cloud if you want to, but considering this phone is more about fun than work, I guess you won’t be doing too much editing. The camera section now includes the option to save settings, something that I welcome, since in the classic WP7 you couldn’t save your preferences and you were left with always picking the camera options you like over and over again.

I have to admit that during my daily use of this Lumia unit I encountered some lag, especially when having the music player open and trying to unlock the screen via slide up movements. What I like about the phone is its video capture quality, that at first sight isn’t much, but it certainly surpassed my expectations on this midrange handset. The sad thing here is that we’re limited to 8GB of storage, we have no microSD card slot, we have no front camera and the audio quality is a bit of a letdown.

However, if you try and remember that this is still a midrange unit, maybe things will look different, especially when you’re paying a very little price on contract for this smartphone. I, for one would pass the offer only because of the plastic shell at the back…