Make no mistake, Nokia Lumia 800 really IS a Nokia N9 with Windows Phone Mango, although everyone seems to keep avoiding saying that… However, I’m not here to criticize (yet), but to give you a quick look at the unboxing of the first Nokia device with Windows Phone on board. 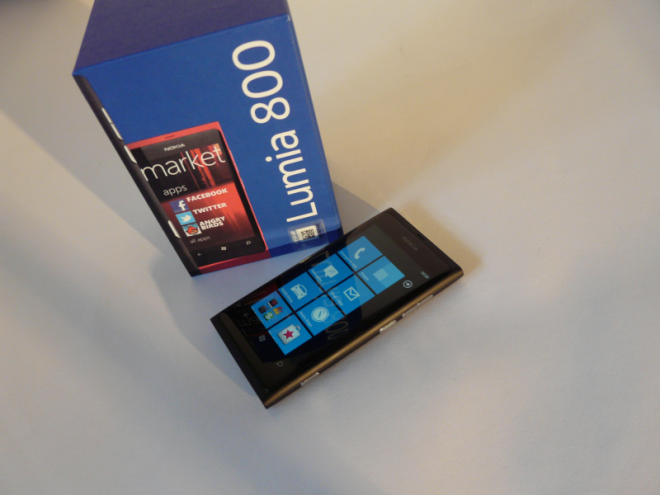 Announced at Nokia World 2011 last month, together with the Lumia 710, this phone is available inside the usual blue box from Nokia. The arrangement of the package is identical to the one of the N9… it includes a case with good grip, a bunch of manuals, the charger, microUSB cable and headphone set. The Nokia Lumia 800 is wrapped in plastic and requires a bit of setup before showing me those sexy tiles.

The 3.7 inch display feels a bit cramped after having used the HTC Titan, I have to be honest. I guess you want to know what’s changed here, in comparison with the N9: well, the Lumia 800 adds a camera button, capacitive buttons below the display and decreases the diagonal to 3.7 inches. There’s also the replacement of MeeGo OS with Windows Phone Mango… More on that will come in the following days, as we proceed to review the handset.