T-Mobile has just provided the details about an upcoming phone, the Nokia Lumia 810, that will be coming to the magenta carrier soon enough. The device will get the Windows Phone 8 experience and an exclusive device paired with the Unlimited Nationwide 4G Data plan and some appealing features. 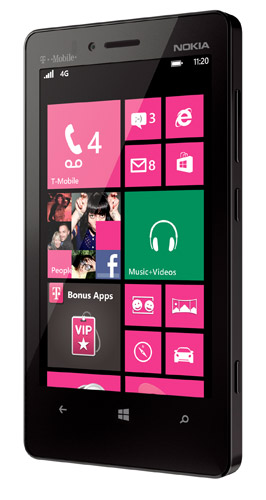 The handset offers fast 4G access, navigation tools and also a good camera, as advertised by T-Mobile itself. This is the fourth largest carrier in the nation, that has the exclusivity to the Nokia Lumia 810. It will be a variant of the Nokia Lumia 820 and it will look exactly like it on the outside. It packs a 4.3 inch clear black AMOLED display with WVGA resolution and a pixel density of 217 ppi and under the hood we find a dual core 1.5 GHz Qualcomm Snapdragon S4 CPU, of the MSM8960 kind.

It also has 1 GB of RAM, 8 GB of native storage, an 8 megapixel camera with Carl Zeiss lens and dual flash, that does 1080p capture at 30 frames per second. Up front there’s a 1.2 megapixel camera and the 1650 mAh battery on board of the newcomer is said to guarantee 14 hours of talk time.