Remember when we said that Microsoft and Nokia are rumored to invest around $100 million in the promotion of the Lumia series in the USA alone? Well, that money has just started being spent, with a light show in Times Square for example. As shown in the picture here, the device gets huge billboards and also some light effects. 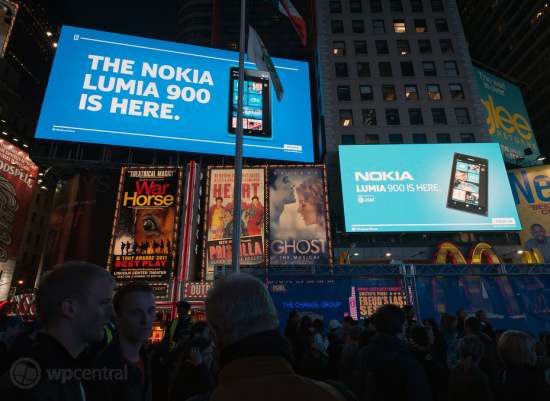 Add to that a party taking place at New York’s Time Square and featuring Nicki Minaj and a DJ. A giant LCD screen created a nifty light show, that include Lumia 900, Nokia and Microsoft logo among others. In other news, some of the people who preordered the Nokia Lumia 900 received their packages on Friday, which was a very pleasant surprise, especially since the device was supposed to arrive on Sunday, April 8th. This is the date of the official launch of the black and cyan versions of the Windows Phone handset.

The white model will be coming too, on April 22nd. In case you don’t know what the fuss is about let me tell you that this is a hot polycarbonate design 4.3 inch smartphone with Windows Phone, priced at $99.99 with a 2 year AT&T contract. There were times when Motorola took the Times Square over with promotions, but now it’s all Microsoft… Can you handle the light show?