After reviewing the Nokia Lumia 800 and the 710, we’ve received for testing the Lumia 900, the largest Windows Phone device made by Nokia. It’s a 4.3 incher smartphone with a big box and thick allure. Last I checked, the handset was available for $100 on contract in the USA. 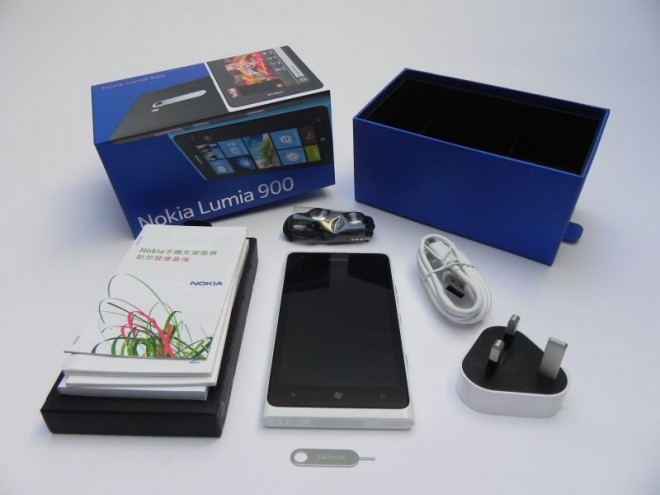 This phone is available in black, blue, white, cyan or magenta and inside the box we find the handset wrapped in plastic, a tiny metal pin used to pull out the microSIM card slot, a bunch of manuals and the other usual accessories. These include a microUSB cable, charger and a pair of headphones that are not in-ear. At the back of the white Nokia Lumia 900 we’re reviewing there’s an 8 megapixel camera with flash and upfront we have a 4.3 inch display with 480 x 800 pixel resolution.

This is a ClearBlack display and other specs include 16GB of storage, 512MB of RAM, a front cam (1MP) and a single core 1.4 GHz processor. Windows Phone 7.5 is the OS of choice here and Lumia 900 is one of the phones that will get Windows Phone 7.8 as consolation for not getting WP8. It also has a Li-Ion 1830 mAh battery, that we’ll put to the test in the following days.