Even though Nokia unveiled two phablets and a tablet during this week’s event, people still were not happy with the releases and wanted more. That’s probably because another model was rumored to appear: Lumia 929. Well, it didn’t get launched, but it did get leaked… this weekend. 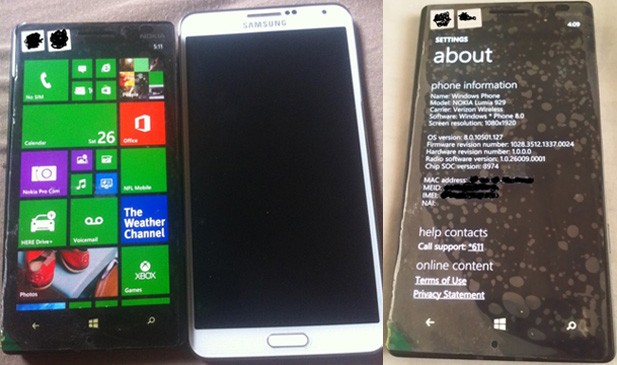 WPCentral forum member Falorin has posted some photos and a video of the device, that’s supposed to come to Verizon by Thanksgiving. Nokia Lumia 929 is expected to be a more compact Lumia 1520 and I have to say its rectangular case looks quite nice in the video. It will feature a 1080p screen, a 20 megapixel camera and Snapdragon 800 chip.

There’s no microSD card slot, but we get 32 or 64 GB of storage inside. Nokia is using a nano SIM slot here and I expect Verizon to price this unit handsomely, to make it truly appealing. 2 GB of RAM should also be on board, as well as 4G LTE and in the end I’d like to mention that somehow the design of this handset makes me think of a Motorola Droid series unit.