Tom’s Guide from France has got a hot Nokia-related scoop for us, claiming that the Finns will announce a new 12 megapixel cameraphone, supposedly called the N8. Will this device be announced at next week’s MWC 2010? 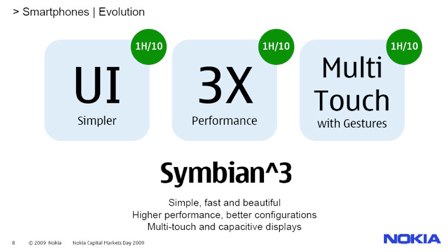 The same French site has info about all the Nokia ranges, C, X, E, N and S. Thus, we learn that the C Series includes models that are low end and voice-based, while the X Series handsets focus on entertainment and music features. The E Series is all about business and e-mail, with the N Series being the high end one and the S series focusing on limited edition and upscale phones.

A couple of flagship models were also mentioned by Tom’s Guide from France: Nokia C5-00, a basic business phone with GPS, that’ll be launched in June, Nokia C3-00, a low cost multitasking Symbian S40 QWERTY handset  with email features and Nokia C5-01, a QWERTY phone that competes with BlackBerries.

Back to the Nokia N8 cameraphone, we learn that it should hit the market this summer, packing a capacitive multitouch display with a 3.5 inch diagonal and also it’ll the first to run Symbian^3 OS. The device incorporates a 12 megapixel camera, that supports 720p capture @ 30 fps. There’s also HDMI output on board and support for Video on Demand via Ovi Store.

If this info is legit, we’re in for a treat this year, thanks to the Finnish handset maker.