After a couple of weeks of speculations, we’ve just learned that Nokia N8 is a real handset, packing a 12 megapixel camera and other neat features. The device will be available starting Q3 with a EUR 370 price tag, before taxes. Nokia N8’s camera features Carl Zeiss optics, Xenon flash and HD quality video capture. 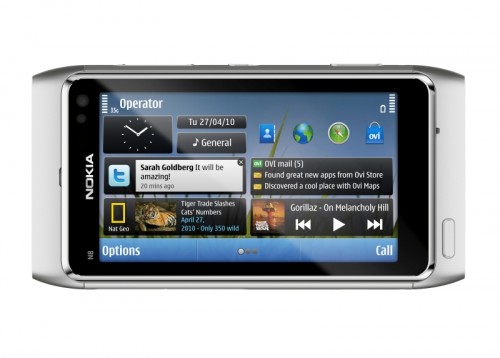 The new device runs Symbian^3, a new platform that we’ve seen in action at the tech shows that took place this year. N8’s platform comes with innovations, like multitouch gestures, flick scrolling and pinch-zoom, plus customizable homescreens (apps and widgets) and 2D/3D graphics architecture. Multitasking is also on board, thanks to apps that run in parallel.

Nokia’s new product incorporates video/photo editing software, that’s intuitive and allows you to mess with content on the go. Also, the handset can be plugged into a home theatre system, for more fun and taking full advantage of its support for HD video and Dolby Digital Plus surround. The device supports access to Web TV services and Ovi Store.

Social networking via a single homescreen app and global Maps walk and drive navigation (free) are available on the smartphone, too, while developers will be interested to learn that there’s an extra bundled for them. Nokia announced that N8 is the first device to integrate Qt, a software development environment, that allows specialists to build apps and deploy them on Symbian and other platforms.