Although we’ve talked about the Nokia X7 once today, the smartphone is back with more details and a very appealing companion, the N9. This long rumored handset is supposed to go live at MWC 2011 in about 6 weeks, according to online speculations and all sorts of gossip. 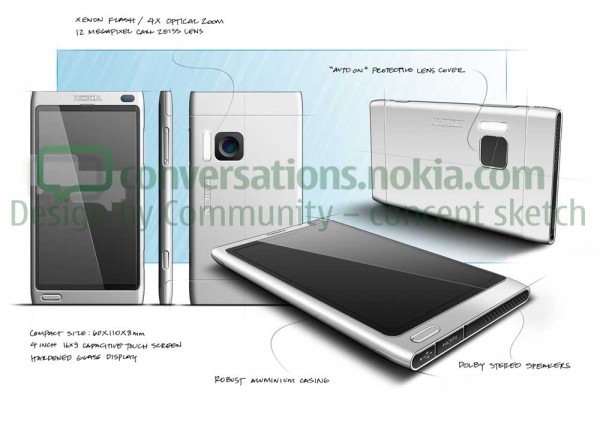 We remind you that the N9 is Nokia’s first official MeeGo phone and that the image above is the winning sketch picked for “Nokia’s next phone” with the contribution of its designers and fans. More rumors point towards an April 2011 release of the N9, plus another MeeGo smartphone being launched a month and a half later.

As far as design is concerned, the N9 is meant to be a very sexy phone, made out of good quality materials and including a very slim case. The previously spotted images of the device are all considered fake right now, especially because they seemed to remind people a lot of a MacBook. Rumors also mention the X7 and E6-00 phones, plus a Symbian upgrade that will take CPUs from 680MHz to 727MHz.

As a bonus, Symbian^3 benefits from GPU acceleration and consumes less battery life. Unofficial sources detail the specs of the N9, that include a 12MP camera, a 4.3 inch AMOLED screen, 1GB RAM and 512MB of video memory among others, while the X7 is supposed to feature 4 loud speakers, 350MB RAM, an 8MP camera and a 512MB graphics CPU. 1080p HDMI also sounds good on the N9, unless it’s a fantasy spec…

Remember that these are all rumors, which are far from confirmed.