Nokia N97 Mini was leaked a while ago by Vodafone Ireland and afterwards pictured via Engadget and then detailed thanks to the folks of Mobile-Review. Now, it’s all as close to official as it gets: Nokia N97 Mini is real and it’ll be announced at Nokia World 09, on September 2-3. 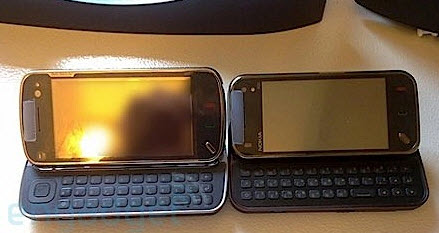 Nokia N97 Mini is a smaller version of the N97, with a tinier display and case size and the same specs as the original device. However, the internal storage might be different, either 16GB or 8GB. Also, Eldar from Mobile Review claims that the specifications remind him of the ones on Nokia 5530 XpressMusic, rather.

That means we’ll be seeing a 2.9 inch display on board with a 640 x 360 pixels resolution, automatic brightness control and we’ve also got to mention the lack of the Nav button. The reduction is not all about the size, but also about the price, since Mini should be 100 EUR cheaper than the bigger handset.

More details will be available in Stuttgart, at Nokia World 09…