And yet another leak from Nokia has come… this time the one of the Nokia Sun model, that’s not a familiar name by any means. This handset is also expected to debut during the Nokia World event, taking place between October 26 and the 27th and also including a bunch of other Windows Phone models. 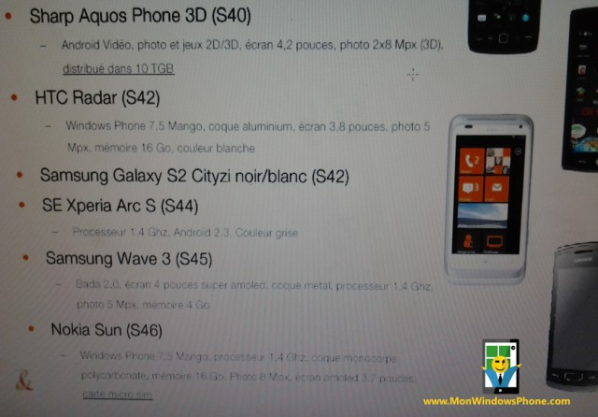 Together with the Nokia Sun we’ll see newcomers such as the already leaked and detailed Nokia Sea Ray, that’s supposed to look just like the N9. Other interesting units will be the Nokia Ace and Nokia Sabre, with the former being actually high specced. As far as Nokia Sun goes, this model is expected on Orange France in November and it should feature a 1.4 GHz single core processor, 16 GB of internal memory and an 8 megapixel camera.

The screen on board is a 3.7 inch AMOLED touchscreen and the device also uses a micro SIM, just like the entire array of WP devices from Nokia. Once again like the N9 and Sea Ray, Nokia Sun will use a unibody polycarbonate shell. With so many models rumored and leaked, what will actually debut at Nokia World 2011?