There’s an exciting Nokia + Microsoft event scheduled for August 17th and that’s probably destined for the announcement of the Finns’ first Mango OS device. Notice that the invite below includes aside from the eye catching “Food and drinks for free” the Nokia and Windows Phone logo. 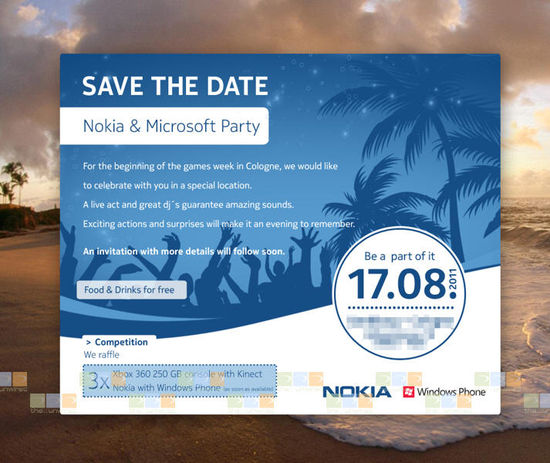 The focus of the event is gaming, since it will mark the start of a games week in Cologne, Germany. This entire week takes place under the name Gamescon and we might get to see what Nokia and Microsoft have come up with during the last months. Considering the recent leak of the Nokia Sea Ray Mango OS phone, we’re expecting to see this model in action.

Aside from this Nokia N9 twin, we might also see some other new models, provided that the northern company is ready to showcase them. There’s also an interesting prize mentioned for winners in the raffle associated with the event: 250GB Xbox 360 consoles and a Nokia Windows Phone (as long as available). So, have we finally reached the long awaited time of debut?