In less than 2 hours from now, Nokia World 2008 will go live in Barcelona and this event is eagerly awaited by mobile industry specialists, analysts and journalists. Nokia has a couple of surprise announcements to make and there are speculations that they’ll unveil a netbook, or a touchscreen smartphone, perhaps even new services. 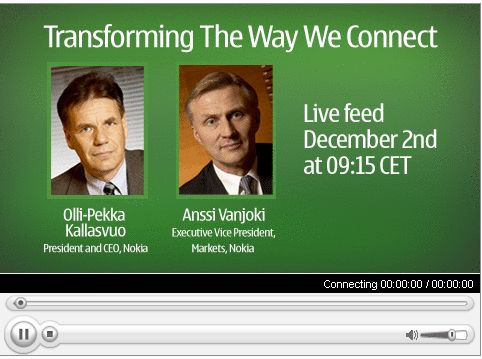 You’ll be able to watch the keynotes of Nokia’s top officials and the live handset launches on the company’s official event site. The webcast will make its debut with a speech about Nokia Ovi, followed by a keynote on “connected navigation” and passing on to games and entertainment.

A couple of more hours from now, we’ll witness “The Way We Live Next” speech, that will show the latest Nokia technologies. GSM Dome will monitor the webcast and you’ll be the first to know what goodies are introduced by Nokia today.