Recently we checked out Mobile World Congress 2009’s official website and we found an interactive map (image below) with a very interesting feature, that allowed the user to find smartphone-only booths if they wanted to. By doing that, we were surprised that Nvidia is also among the brands with a smartphone booth.

Could this mean that we’ll be seeing the providential handset with an Nvidia Tegra processor, that we were waiting for? 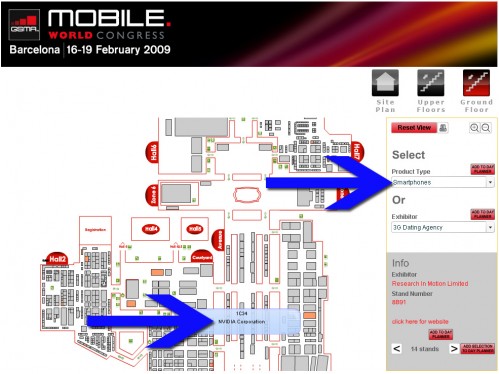 A couple of weeks ago we found out that HTC will be showing a couple of Windows Mobile smartphones at Mobile Congress 2009, some of them featuring the Tegra CPU. Since this mobile chip will be perfect for running Windows Mobile 6.5, why shouldn’t it make it to the first Acer smartphone, as well?

By doing this, we might be witnessing the birth of a star, inspired by the E-Ten experience and powered by Tegra + WM 6.5.

The Inquirer reported a while ago that Microsoft and Nvidia were also working on a “killer smartphone”, but I guess it’s too early to talk about that, as the affair sure smells like Windows Mobile 7. Let us remind you that the Tegra 650 CPU supports Web 2.0 apps, 1080p HDMI, NTSC/Pal TV out and WSXGA+ LCD and CR