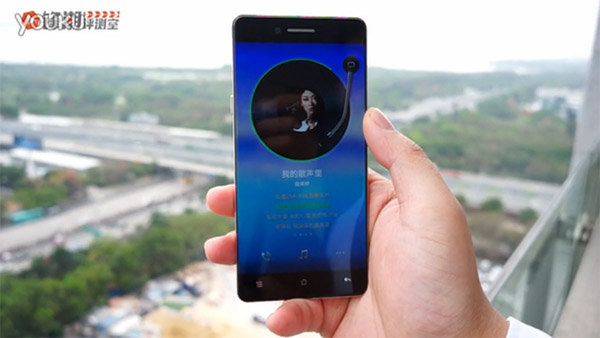 We detailed yesterday a mystery bezel-free Oppo handset, speculating it could well be the R7 model, but also being cautious about it. Why? Because it all looked like Photoshop work, but today we also uncovered a video of the same device, that confirms its unusual design was actually legit.

So, turns out we may be dealing with the Oppo R7 after all, a very slim device, with impossibly narrow bezels. The UI on top of Android is customized and we get 3 capacitive buttons below the display. We catch a glimpse at the Music Player and Video Player in the video below and rumors claim that we’re going to get an octa core MediaTek MT6795 processor and a 20.7 megapixel camera.

I guess this is the successor to the Oppo R5, that was launched in late 2014. We say that because the design is very similar, at least in form factor and the diagonal may be the same, around 5.2 inches. We also expect the camera to stay at 13 MP or be upgraded at 20 MP maybe. Oppo has been an innovator with the N series and now they seem ready to do the same with the R models.