The most important launch during CES 2009 was surely that of Palm Pre, the long awaited iPhone Killer, featuring a touch display and QWERTY keyboard, plus the new WebOS platform. Recently Palm posted the full video of its launch keynote, so you get to see the handset in action and find out the concept behind it. 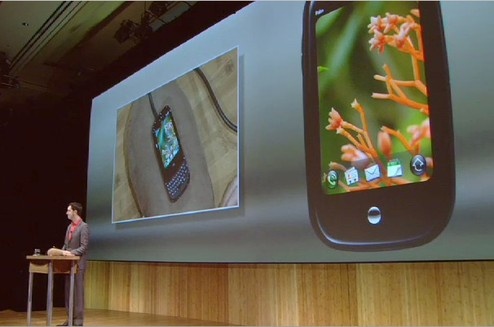 Jon Rubinstein, Palm executive was the first to take the stage, creating a pretty nice atmosphere with the aid of a short story and then he was followed by Ed Colligan, Palm president and CEO. The latter mentioned that his company doesn’t manufacture fridges or TV sets, but MOBILE devices and they like to stay focused on this area.

During the keynote, Rubinstein and Colligan mentioned various aspects they don’t like about current mobile phones and finally, when the moment arrived, Palm Pre was introduced, accompanied by the public’s applause. WebOS was also shown in action and we found out that we can switch from corporate mail to our personal Google account at any time, and still be able to use Facebook while doing this.

Palm’s officials also mentioned that Pre uses a QWERTY keyboard and GPS, plus threaded SMS messages (Treo style), but combining this aspect with IM. The company’s main men claimed that Pre’s design is inspired by nature and they thanked Sprint for their cooperation, also reminding us that the carrier will be the one launching the device.

For more details, you can download the full video of the keynote by clicking this link.