Samsung just expanded its Galaxy series even further, with two midrange Android phones, that I’m certain we’ll see and touch at MWC 2012. I’m talking about the Samsung Galaxy Ace the Galaxy Mini 2. The Ace 2 is the better model of the duo and you can see both new arrivals in the image below. 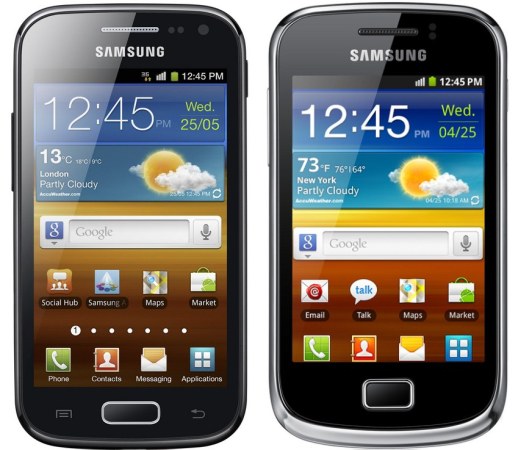 Know that the Ace 2 features a dual core 800 MHz CPU and a 1,500 mAh battery and 3.8 inch WVGA display. There’s also 4GB of storage on board and a navy blue battery cover, while the Mini 2 opts for a bright yellow battery cover. The Galaxy Mini 2 offers a single core 800 MHz processor, a 1,300 mAh battery and a 3.27 inch HVGA display. Both new models rely on Android 2.3 Gingerbread and I doubt they’ll receive Android 4.0 because of the specs. Mini 2 is expected to debut in France in March, while the Ace 2 will hit UK shops in April.