Samsung Galaxy A8 has been leaking a lot over the past weeks and we’re barely gotten accustomed to this name, since it popped up just one or two weeks ago, as the real name for the Galaxy A5 (2018). That device will also have an A8+ version, that just leaked in the hands on video below, coming straight out of Bangladesh. 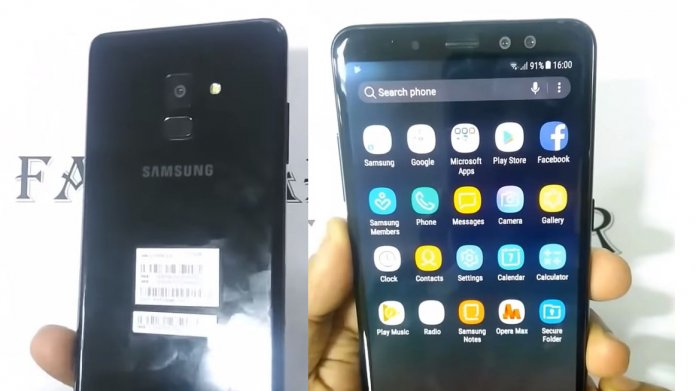 We’re dealing with a pretty narrow and elongated device, that feels a bit like the Galaxy S8 and Note 8. It has narrow bezels and an 18:9 aspect ratio, plus Samsung Experience on top of Android 8.0 Oreo. There’s no longer a Home button and the fingerprint scanner has been moved to the back. We also have a quick rundown of the camera UI, showing us that the main cam has a 16 MP res and the front cam also 16 MP.

I also spotted Bixby Vision in there, so Bixby is part of the package. The source also lists a bunch of specs at the end of the vid, including the 6 inch Full HD+ Super AMOLED screen, a dual front camera with a 16 MP and 8 MP sensor and the Exynos 7885 CPU. There’s 6 GB of RAM here, 64 GB of storage and a microSD card slot. We’ve got a 3500 mAh battery in the mix with fast charging and waterproofing in the IP68 range.

We expect to see this phone in January.