Samsung Galaxy Nexus was supposed to get launched on November 17th in the UK, but things might not go as smooth as planned… Right now a couple of retailers, such as Amazon are listing the device with a pushed back date, so it’s supposed to come in December, the 2nd to be more precise. 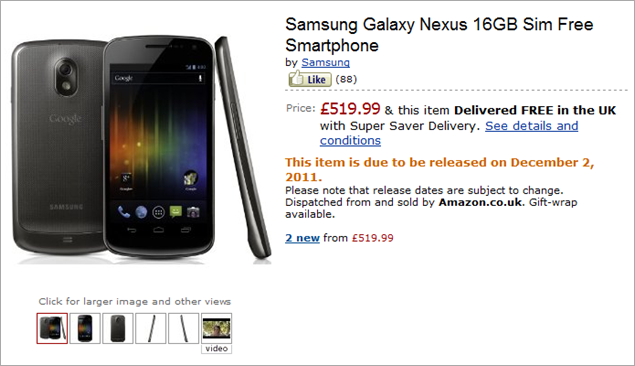 Samsung didn’t release any info about a potential launch date, but December (early December for that matter) is a safe bet. Verizon roadmaps say that we won’t see the phone until November 21st, although even that can’t be confirmed. The excitement that surrounds the phone is huge, since it’s the first in the USA with a 720p display and also the first with Android 4.0 Ice Cream Sandwich.

Samsung Galaxy Nexus really stole the public’s attention from the iPhone 4S and it should be a hit if it comes before Black Friday. A delayed launched would only miss the time frame for price reduction and the craziness of the public for novelty. However, there’s always Christmas time to have fun with.