Samsung seems to have an interesting approach with this year’s Note 10 series. This time they’re not only aiming at enterprise and business professionals, but also towards teen vloggers making millions, or on their way to making millions. These new phones are oddly enough all about video and the stylus gets new remote control features. Couple that with the camera of the Galaxy S10 5G and you’re all set.

We handled the Galaxy Note 10+ right when it was announced and I’m happy to say it’s easier to handle than the Galaxy A80 or OnePlus 7 Pro. It’s still big, since it’s a 6.8 inch phone, but its bezels have been cut to the extreme. There’s no longer a chin here and the “forehead” has received a selfie camera cut. The side curves of the screen are no longer distracting or morphing the videogames. 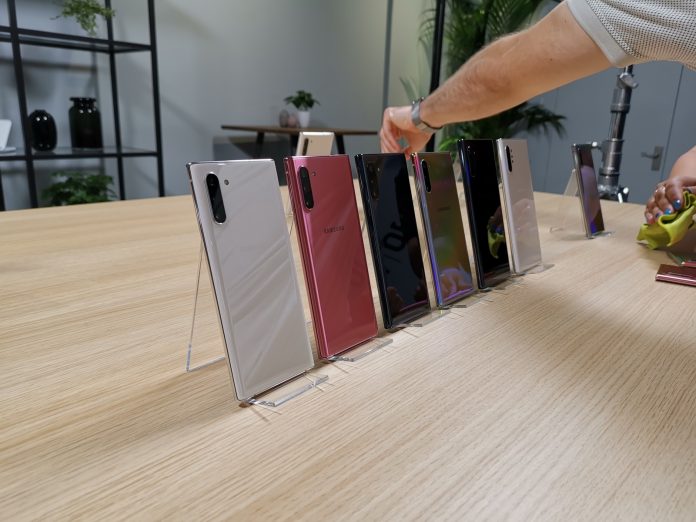 The handset is made of glass and metal, it’s 7.9 mm thick and I think that the fact it’s not even 200 grams heavy is a big plus. We’re dealing with waterproof device (IP68), which has a Power button moved from the Right to the left and also doing double duty as the Bixby button. I love the brand new Aura Glow hue, which catches the light in a rainbow of colors, a bit like a pool of gasoline does when it catches the sun. There’s also Aura Black and a pearly white. 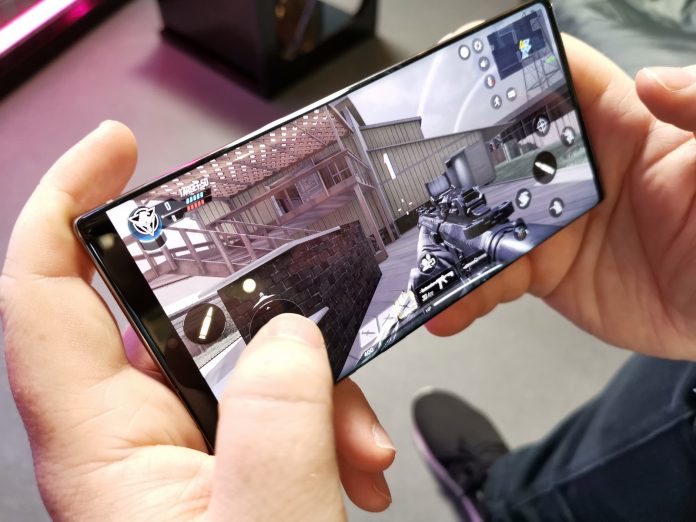 Screen-wise, there’s a Dynamic AMOLED panel here, with a 6.8 inch resolution and a 3040 x 1440 pixel resolution. It’s got HDR10+ support and the videos look great on the screen, color-wise, contrast-wise, wide angles, you name it. However, call me crazy, but I found the brightness lacking a bit, which to be honest I also found on the Galaxy S10+. 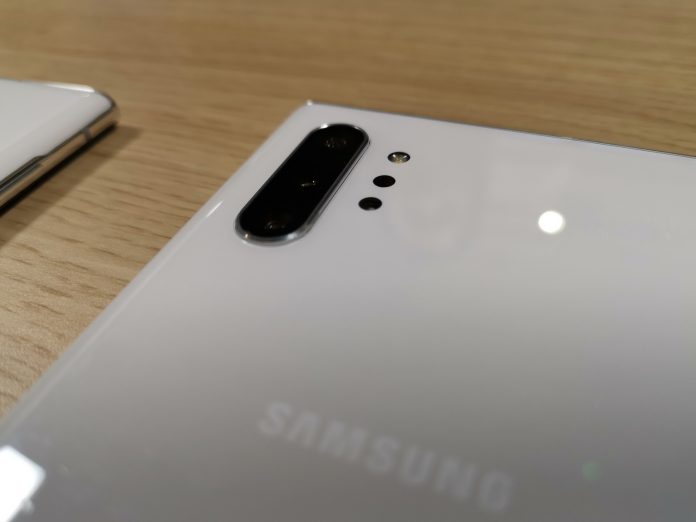 In the camera are we basically have the optical package of the Galaxy S10 5G. There’s the main 12 MP camera, with variable aperture, a 12 MP 2X optical zoom camera and 16 MP wide angle camera, plus VGA ToF 3D cam. Cut right in the middle of the screen’s top side is a 10 MP singular selfie camera. We still have Live Focus, with 4 filters, Super Slow Motion and 4K 60 FPS video capture. 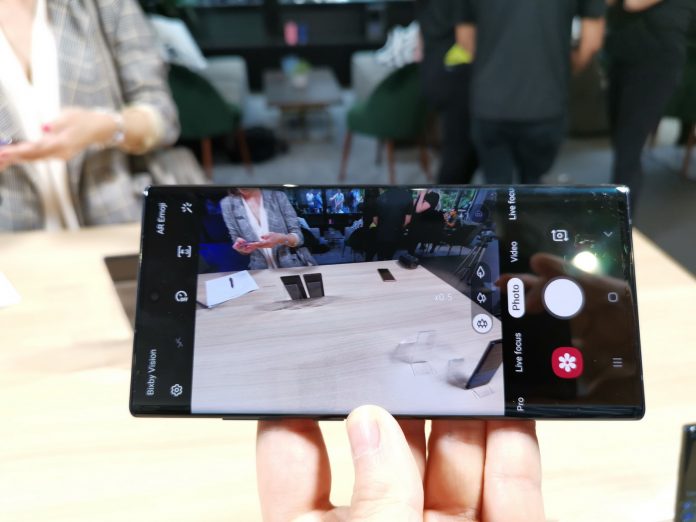 There are novelties, like AR Doodle, which lets you draw on top of videos, applying the drawings to your face for example. There’s also Live Focus Video, basically Bokeh for video, with 4 filters: there’s the regular blur, a pair of circles, a sort of VHS effect and a black and white background, while you stay colorful. Using the new S Pen you can control the zoom, change camera lenses from afar, with hand gestures (side moves or rotations).

I can’t say much about the camera, since I did’t get to play with it. The little I did, I noticed that the selfies and Bokeh have been upgraded from the S10. 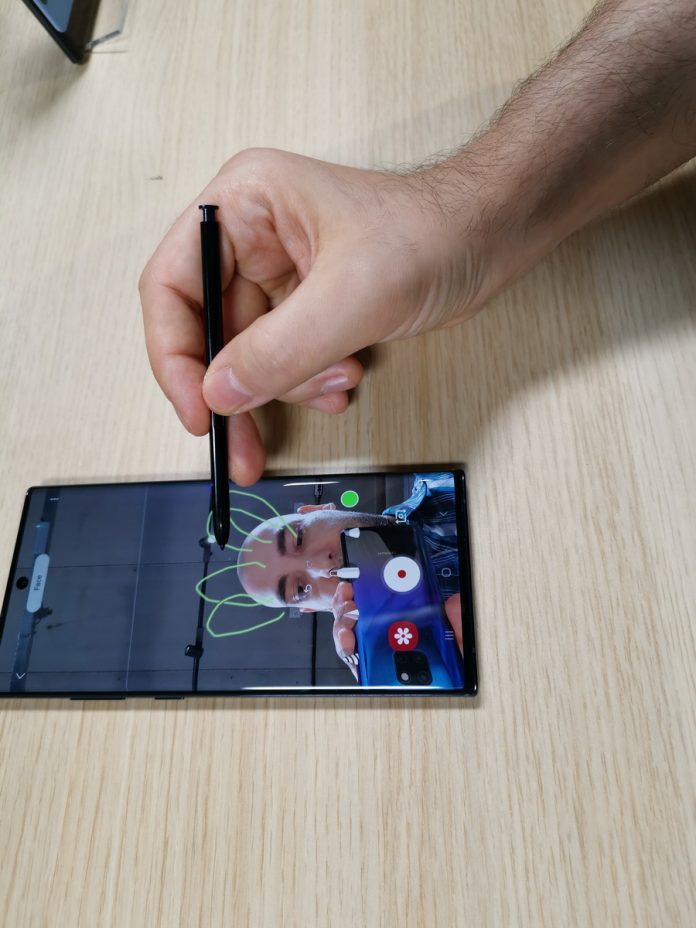 The core features of the S Pen are kept here, including the Live Message, Screen Write, Smart Select, PENUP, Translate and Magnifier Glass. There’s new stuff, like the fact the stylus works up to 40 meters in distance and the battery life is 10 hours in standby. The pen design is the same and the stylus is able to control the camera from the distance with more options, like zooming in or out, changing lenses and more. 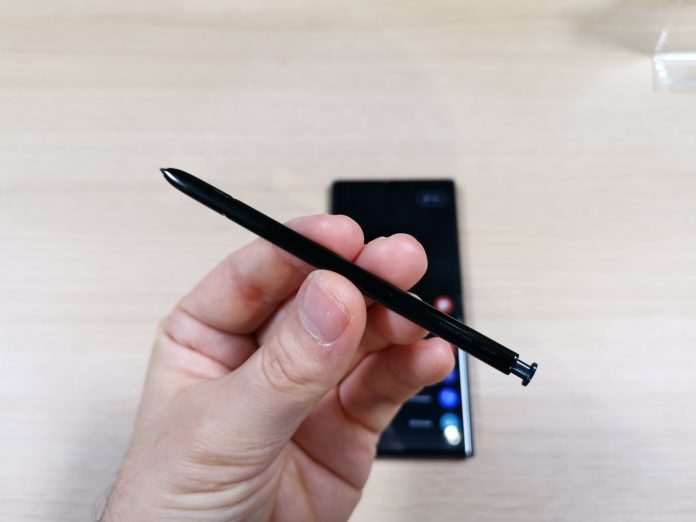 You can also use the S Pen to write on the screen while in standby and of course draw or write by hand. The latter can be converted to digital text and also exported to Word and PDF this time around. There’s also a new set of video editing options integrated natively on the device, with new features like transitions, filters, text, video speed, soundtrack and even drawing on top of the video with the stylus. There’s a lot to edit here and vloggers will love it.

Videos are rendered crazy fast with these effects applied. There’s also a Game Booster area for gamers, with resources tuned for gaming and a video record option for the screen and your face, useful for game streaming. By the way we also played Call of Duty Mobile on the device and it looked fantastic and the device felt very comfy in hand. The game is an exclusive to these devices, from what I heard.

There’s also a Valve partnership and SteamLink, letting you keep playing the game you started on the PC on this phone. We also have DeX functionality just by hooking up the device with an USB-C cable to a PC or PC accessories. 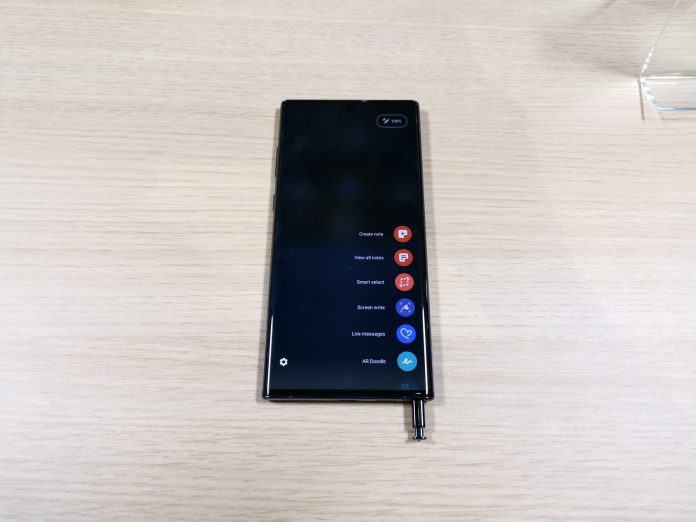 Samsung Galaxy Note 10+ has moved on from the CEO/enterprise phone to a young person’s phone. Millionaires are no longer company bosses, but rather young people travelling and making bank out of vlogging. They can now edit videos on the go, do some blogging, writing, drawing and even game streaming. There’s still business and enterprise to do, Office and so forth, but there’s a new set o features in town.

Samsung is aiming at the next Ninja, PewDiePie and Marques Brownlee with this phone and that’s visible. Believe it or not, this phone can also give the ROG Phone II and Black Shark 2 Pro a run for the money. We’ll be back with a full review soon!