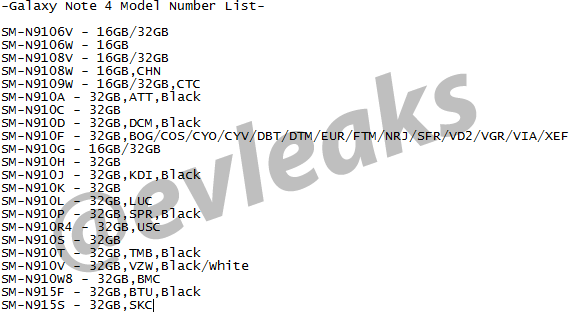 Besides Galaxy S5 Prime, another expected device by all the Samsung fans around the worls is the Galaxy Note 4 phablet. Recently, the whole model number list of this device showed up on the web through the popular leakster @evleaks.

According to the latest rumors, Samsung Galaxy Note 4 will arrive in two versions, one with a regular flat display and another with a curved OLED panel. Also, the new Samsung phablet will bring a Quad HD 5.7-inch display with a resolution of 2560 x 1440 pixels. Is expected that Galaxy Note 4 to be officially introduced on the market in this fall at IFA 2014 ( September 5-10).