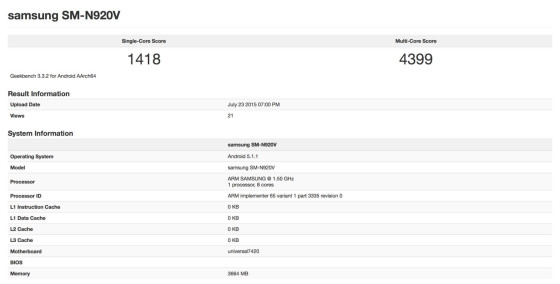 Samsung Galaxy Note 5 has leaked a lot lately, in renders and hands on pictures, specs and listings, as well as user agent profiles. While a few details remain unclear, we have a basic idea of its core specs. Today part of that idea has changed, through a GeekBench leak.

It appears that the Verizon version of the phablet (SM-N920V) has been passed through the GeekBench benchmark and revealed the presence of 4 GB of RAM on board. Originally we thought it was going to be 3 GB, since all the leaks pointed to that direction. We also see that the CPU here is the powerful octa core Exynos 7420, not the rumored Exynos 7422.

Android 5.1.1 and a Quad HD screen are also pretty much sure things, although surprisingly the diagonal of the Note 5 is still a subject of debate, ranging anywhere from 5.5 to 5.9 inches. A 16 megapixel back camera, microSD card slot and 32 GB of storage should also be in the mix, plus an auto eject stylus. In about two weeks we’ll learn more! Impressive benchmark results, by the way.