Japan just got its first LTE smartphone, unbelievable as that may seem, considering how technologically advanced this country is. Also, this newcomer is a Samsung Galaxy unit, the Galaxy S II to be more precise. The device just appeared on NTT DoCoMo, that carrier that will see it and run it on the next gen Xi network. 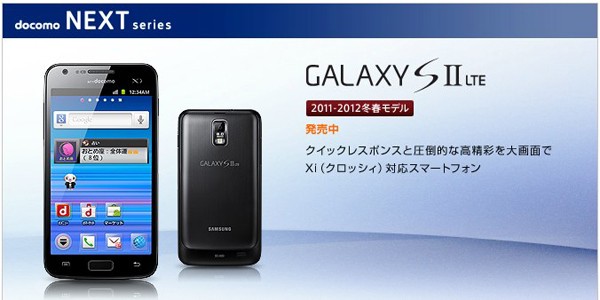 Top download speeds of 37.5Mbps are promised and the handset will cost around $260 on a two year contract. DoCoMo wants 4G phones to reach around 30 million customers by 2015, with a bunch more handsets with this feature available before the year end. Fujitsu Arrows X LTE F-05D is another LTE model that will come to Japan, as well as the LG Optimus LTE, that was actually the first 720p display phone announced officially.

Aside from the connectivity upgrade, Galaxy S II LTE will come with a 4.5 inch touch display instead of the 4.3 inch one and a dual core 1.5GHz processor of the Scorpion kind, instead of the dual core 1.2GHz Exynos CPU. The battery is a Li-Ion 1850 mAh unit, more powerful than the original 1650 mAh unit.