Although the Galaxy S II has already been available up North for a while now, it’s time for the US release, so better late than never. AT&T already published a sign up page and we’re waiting for an official announcement any minute now. However, Sprint seems to be the favorite carrier for the release of the handset. 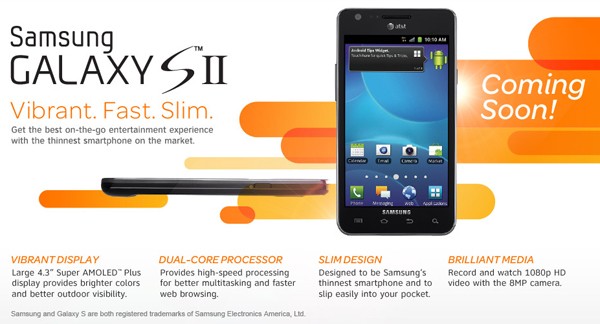 The device has a big “Coming Soon” sign available and no other details are available at the time. You might be interested to know that recent benchmarks have shown that the Galaxy S follow-up has the most powerful GPU available on the market, so if you’re into gaming, HD video playback and other activities that require a good GPU, this is the smartphone for you.

At its core there’s the Exynos CPU we’ve been hearing so much about and the design is also something to enjoy, since at 8.5mm this model would become the thinnest smartphone in America. However that’s probably bound to change once the iPhone 5 is out, since Apple doesn’t make them only more powerful, but also thinner.