We previously knew that Samsung was supposed to announce or start offering Galaxy S III Jelly Bean updates at the end of August, but that didn’t come through. Now we’re supposed to wait till October, according to a Samsung Denmark leak. It also appears that Galaxy S II will get its share of software update in November. 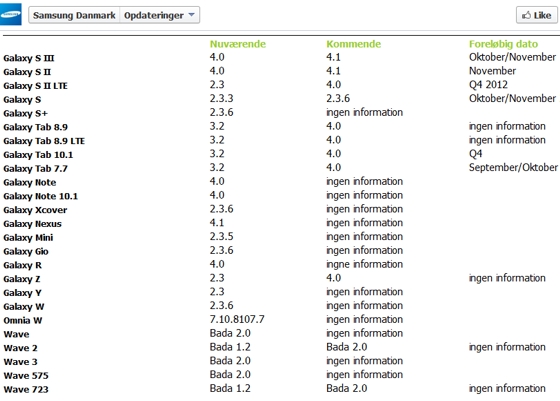 Keep in mind that October is only the month when the S III JB update starts rolling out, so it could reach November if it’s slow. They also list some Bada OS updates in the tablet above and a surprise: Galaxy Ace 2 and Galaxy S Advance will get Jelly Bean! Meanwhile you should know that UK carrier EE UK will launch the Samsung Galaxy S III with Android 4.1 preinstalled, although I have no idea when that will happen.

It’s important to note that both the Galaxy Ace 2 and Galaxy S Advance are running Android 2.3 Gingerbread now and they will skip straight to Jelly Bean according to Samsung Bulgaria. Pretty strange, right? We’ll see how this pans out in the second and the third month of autumn, coming soon!