Samsung is apparently preparing a Galaxy S III version with Tizen OS on board for some reason. This was shown by a WiFi certification for this model that was recently received by the handset. This is a very curious choice of OS on such a potent device, but we know that Sammy likes to experiment with a lot of platforms, from Windows Phone 8 to Firefox OS and from Windows 8 to Tizen. 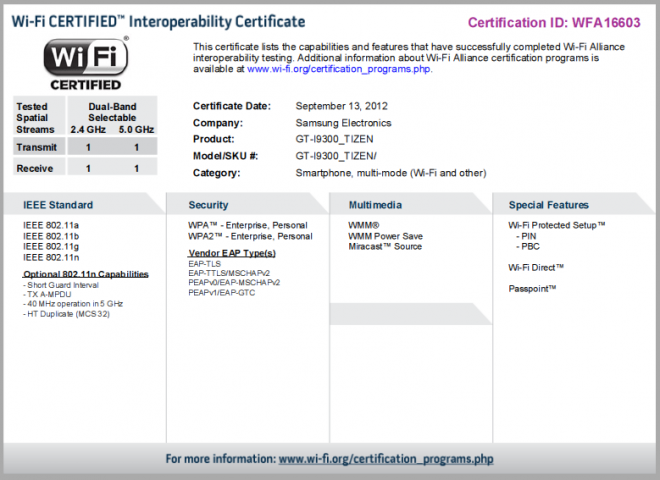 Samsung may be testing a Tizen OS phone with the same specs as the Galaxy S III or they may be using the S III for OS tests. Samsung delayed Tizen OS devices till 2013 last I heard, but they’re certainly involved in this initiative. Rumors have also been going around, saying that Sammy may merge Tizen and Bada and create one new, single platform for the low/mid end market. Samsung is expected to introduce its first Tizen devices at MWC 2013, if everything works out fine.

For those of you who don’t know, Tizen is a free and open source mobile OS, based on the Linux operating system and incorporating some elements from the MeeGo project, like the network management. The Tizen Association handles the evolution of the OS and includes the likes of Huawei, Intel, Orange, Panasonic, Samsung, Sprint and Vodafone. The developers rely on HTML5 and WAC technologies for the platform’s future.