Samsung Galaxy S IV was announced yesterday and we already saw it leaked a bunch of times on the web, courtesy of pics coming from China. Now, tech journalists from the same country managed to get hold of this model and dissected it, as shown in the pictures below. 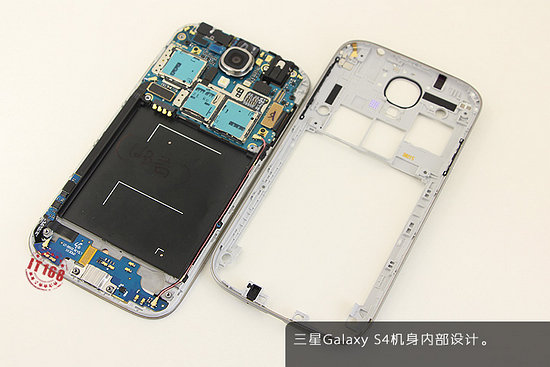 China Unicom was responsible for the leak, the same carrier that was supposedly the one supplying the Duos version of the handset before its announcement. The Chinese telecom operator offers this device with 3G WCDMA support and also without 4G LTE. There’s a Full HD display here, an 8 core CPU, 2 GB of RAM and a 13 megapixel camera. The internal design of the device is shown in the pics in the source link and I have to mention that the outer frame seems to be made of aluminum die cast.

Samsung appears to have also created a special heat sink sheet for the 8 core processor. The main motherboard has a smaller circuit board attached to it. The camera module with lens and 13 megapixel sensor is also shown and it’s supposed to have a large aperture. I have to say that the battery cover seems to be more sturdy than the one of the S III. Overall I can see that Samsung tried to cram inside as much technology as possible.