It is up to the top Android smartphone manufacturer to take the lead for this year also like they did since the launch of the first Galaxy S smartphone with Froyo/Gingerbread.  The Galaxy S II is still considered a very tough to beat offer and as for the S III the manufacturer really changed the basis for interaction and style. 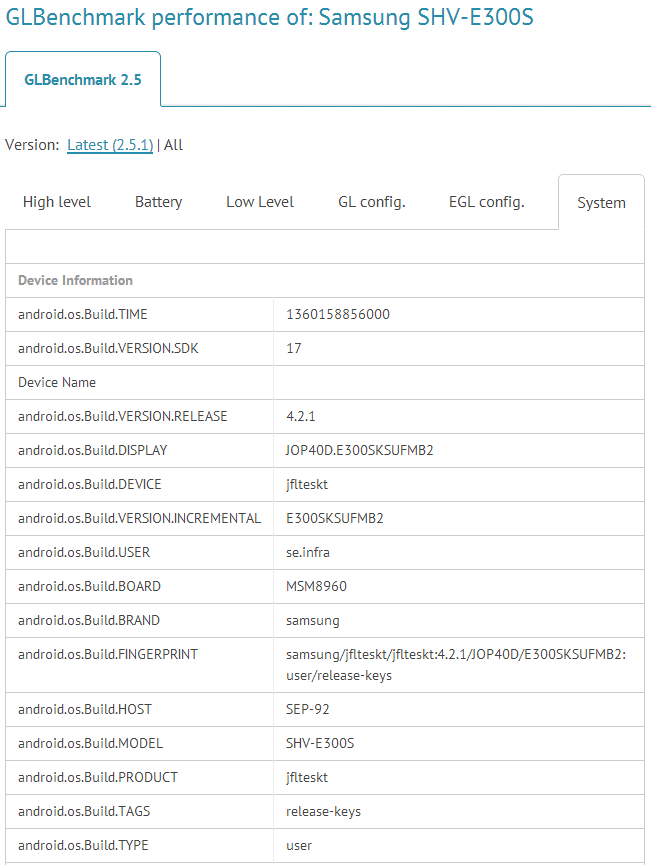 We have slowly gone in 2013 and for this year a lot of manufacturers have already announced their most prized possessions in terms of Android smartphone. For now a new trend has been set with Full HD 1080p displays, quad-core chips and 2 GB of RAM. The Galaxy S III already fulfills a lot of these, except the screen and RAM in the International version. Besides that the device supports WiFi Direct, NFC, DLNA and all sorts of proprietary protocols by the manufacturer. What will the Galaxy S IV provide.

Not to long ago, a Samsung employee of a high rank made a statement regarding the future assets of the company. From there and also all the rumors that have been spread around we know that the Galaxy S IV is likely to be announced after this year’s MWC event in Barcelona. The latest source of info about the device comes straight from GLBenchmark and confirms what we already suspected it was coming. The Galaxy S IV will be powered by a Qualcomm MSM8960 quad-core chip clocked at 1,9GHz  and the Adreno 320 GPU. It will feature a Full HD display, Android Jelly Bean and the manufacturer’s usual design with no software keys. Other souces have been claiming that the S IV might even come with a Exynos 5 Octa (8-Core) chip along with 2GB of RAM and a 13 Megapixel Rear facing Camera.