Samsung Galaxy S seems to be the only smartphone hot enough to challenge HTC EVO 4G to a duel and we’ve just learned that the phone now has a special webpage set up over here. Apparently, the handset is set for an US debut “this summer” and we know that it’ll reach T-Mobile first, maybe AT&T and Verizon, too. 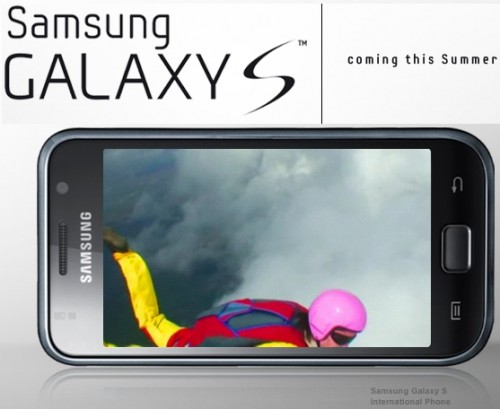 A Howard Forums user reports that Galaxy S will also have a CDMA version, that should hit Verizon’s portofolio. It’s interesting that this carrier already has the Droid Incredible high end Android phone, so what’s the point in offering another hottie, specially with Moto Shadow/Xtreme on its way, too?

In case you’ve been living under a rock, Samsung Galaxy S runs Android 2.1 (that will turn into Froyo later on, via upgrade), it features a 4 inch WVGA Super AMOLED display, a 1GHz ARM Cortex A8 processor, WiFi, GPS, Google Maps with free navigation, a 5 megapixel autofocus camera and HD video recording.

There’s also a VGA camera for video calling on board, 16GB of internal memory and a microSD card slot among the specs. Galaxy S will retail for $199, with a 2 year contrast, much like the iPhone 4.