One of the members of the Samsung Mob!lers team, Szabocls Ignacz had the opportunity of testing the Samsung Galaxy S4 smartphone the way we’d never dare. He put it to a scratch test, using knives, coins, keys and more, as shown in the picture and video below. 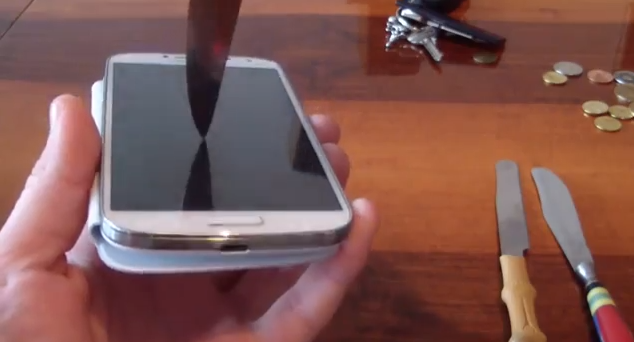 It’s true that the man didn’t quite press the screen very hard in his attempt to scratch it… Among the objects used to scratch the Super AMOLED screen there were a pen, a pair of keys, kitchen knives, dull knives and a few coins. The screen escapes unscathed after this torture. As you probably know already the handset is up for preorder on several carriers in USA, so you can already order it.

Samsung Galaxy S4 packs a Super AMOLED capacitive touchscreen with a 5 inch diagonal and a Full HD resolution. It has Gorilla Glass 3 protection, a piece of technology that debuted early this year and it generates 40% less visible scratches than the Gorilla Glass 2. It’s also 3 times more effective than its predecessor. What do you think of this experiment?