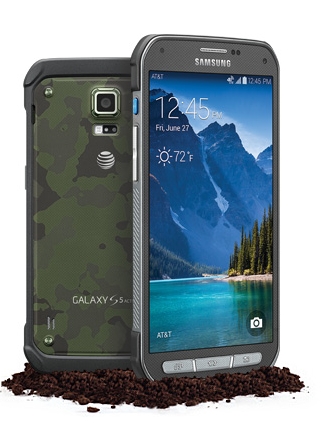 After a lot of leaks with the Samsung Galaxy S5 Active, now the succesor of the S4 Active it’s official after Samsung and AT&T announced it. This new version of the Galaxy S5 flagship it’s available online and in AT&T stores for $200 on a two-year contract or for $715 contract-free.

As the name suggest, the Galaxy S5 Active packs a shock resistant, water resistant and dust proof 3 casing. The device also comes with a variety of features for the active users, like the built-in heart rate monitor, steps counter, nutrition tips and a convenience key found on the side of the phone, a key that shows all the apps related to outdoor activity.

Samsung Galaxy S5 Active comes with a 5.1-inch Full HD Super AMOLED display, a Qualcomm Snapdragon 801 quad-core processor clocked at 2.5 GHz,  2 GB of RAM, 16 GB of storage and a microSD card slot up to 128 GB. We also get a 16-megapixel camera on the back and a 2-megapixel front facing camera. 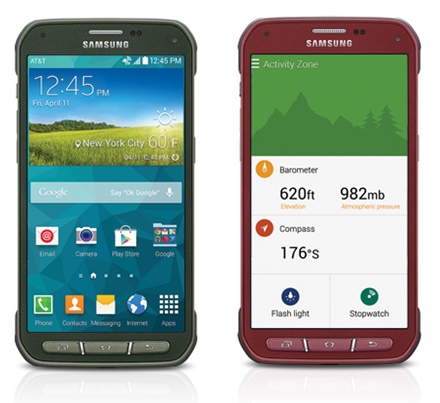 On the connectiviy side, Galaxy S5 Active offers WiFi, Bluetooth, NFC and 4G LTE. The phone measures 145.2 mm in lenght, 73.4 mm in width, 8.89 mm in thinnes and weighs 170 grams. The battery itțs a 2.800 mAh unit that promises up to 29 hours in talk time and up to 20 days in standby time. Samsung Galaxy S5 Active will be available in camo green, titanium grey and ruby red.