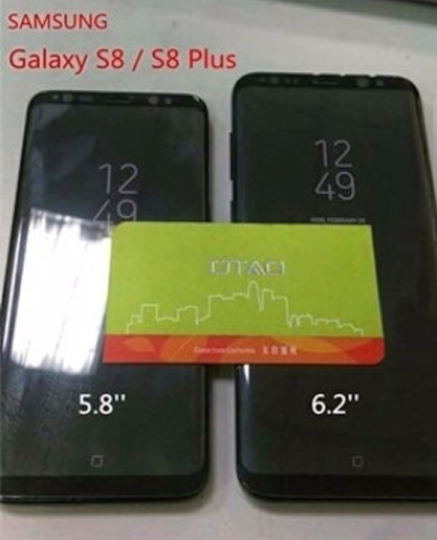 Just hours after the Galaxy S8 Plus leaked and the Galaxy S8 was pictured with virtual buttons, the same phones are at it again. This time they both leaked together, as shown in the picture below. The devices are shown side by side, which is useful if you want to get an idea of their actual size.

I’ll remind you that the Galaxy S8 is said to have a 5.8 inch screen, while the Galaxy S8 Plus should have a 6.2 inch display. This image also reveals the soft Home button. Galaxy S8 marks a change in the Samsung design approach, replacing the physical Home button and capacitive buttons with… more screen. The new virtual button will be part of the Always on Display feature kept from previous models.

Rumors say that pressing down on the soft Home button with a bit of pressure will wake up the screen and double tapping it launches the camera app. The Galaxy S8 Plus is surprisingly sexy for such a big phone and somehow it seems even more curved than the Galaxy S8. It’s certainly a long phone and also pretty narrow. We’ll see it debuting on March 29th.