Samsung’s got a 4G slider coming to Verizon, it seems, if we’re to believe a recent leak of the blurry photo below. This one is a LTE handset with sliding keyboard and Super AMOLED Plus display, according to rumors. 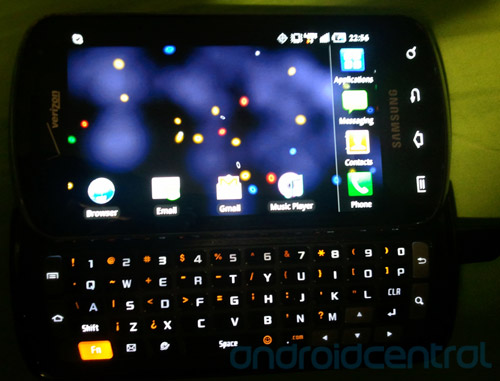 Samsung SCH-i405 is the model and some say it’s faster Samsung Galaxy S. It could be a mere port of the Samsung Epic 4G, or a version of the Galaxy S II Function, but the 5 megapixel camera downgrade makes that unlikely. Aside from this cam, we also get a front videocall unit (1.3 megapixels). The keyboard now sports Internet shortcuts and the device ships with Android 2.3.4 out of the box.

i405 could feature the single core 1.2GHz CPU of the Infuse 4G, although that old school 1GHz chipset of the first Galaxy S could be included this time as well. No info about launch date just yet..